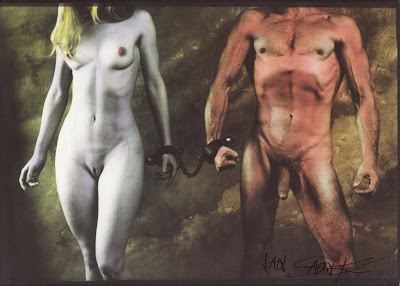 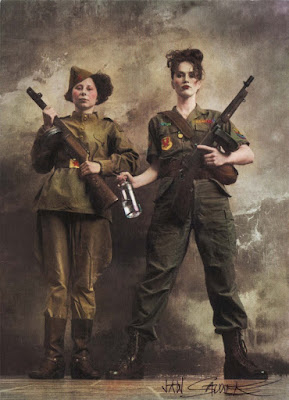 Jan Saudek (b. 13 May 1935 in Prague, Czechoslovakia) is a Czech art photographer.
Saudek's father was a Jew and the family was therefore persecuted by Germans. Many of his family members died in the Theresienstadt concentration camp during World War II. Jan and his brother Karel were held in a children's concentration camp located near the present Polish-Czech border. He survived the war and according to his own biography got his first camera Kodak Baby Brownie in 1950. He apprenticed to a photographer and in 1952 started working as a print shop worker, where he worked until 1983. In 1959 he started using more advanced camera Flexaret 6x6, also engaged in painting and drawing. After completing his military service, he was inspired in 1963 by the exhibit catalogue of Steichen's Family of Man to try to become a serious art photographer. In 1969 he traveled to the United States and was encouraged in his work by curator Hugh Edwards.
Returning to Prague, he was forced to work in a clandestine manner in a cellar, to avoid the attentions of the secret police, as his work turned to themes of personal erotic freedom, and used implicitly political symbols of corruption and innocence. From the late 1970s he gradually became recognised in the West as the leading Czech photographer, and also developed a following among photographers in his own country. In 1983 the first book on his work was published in the English-speaking world. The same year he finally becomes a freelance photographer as the Czech Communist authorities allowed him to cease working in the print shop, and gave him permission to apply for a permit to work as an artist. In 1987 the archives of his negatives were seized by the police, but later returned.
Saudek currently lives and works in Prague. His brother Karel Saudek is also an artist, and is now the best-known Czech graphic novelist.
His best-known work is noted for its hand-tinted portrayal of painterly dream worlds, often inhabited by nude or semi-nude figures surrounded by bare plaster walls or painted backdrops, frequently re-using identical elements (for instance, a clouded sky or a view of Prague's Charles Bridge). In this they echo the studio and tableaux works of mid nineteenth century erotic photographers, as well as the works of the painter Balthus, and the work of Bernard Faucon. His early art photography is noted for its evocation of childhood. Later his works often portrayed the evolution from child to adult (re-photographing the same composition/pose, and with the same subjects, over many years). Religious motives or the ambiguity between man and woman have also been some of Jan Saudek's recurring themes. His work was the subject of attempts at censorship in the West during the 1990s.
Some of the works of Jan Saudek have entered popular culture in the West, being used as covers for the CD albums of Anorexia Nervosa (New Obscurantis Order), Soul Asylum (Grave Dancers Union), Daniel Lanois (For the Beauty of Wynona), and Beautiful South (Welcome to the Beautiful South).
Jan Saudek's Black Sheep & White Crow which features a semi-naked prepubescent girl was removed from the Ballarat International Foto Biennale on the eve of its opening on August 21, 2011 following child prostitution claims.