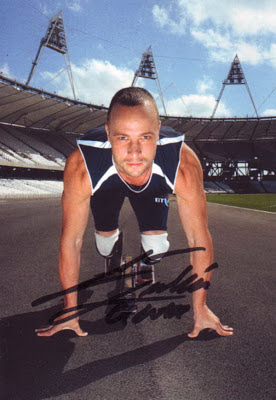 Oscar Leonard Carl Pistorius (born 22 November 1986) is a South African sprint runner. Pistorius, who has double below-knee amputations, competes in T44 (single below knee amputees) events though he is actually classified in T43 (double below knee amputee). He is the T44 world record holder for the 200 and 400 metres events, and was previously the world record holder for the 100 metres as well.
In 2007, Pistorius took part in his first international competitions for able-bodied athletes. However, his Flex-Foot Cheetah carbon fibre transtibial prostheses gave rise to claims that he had an unfair advantage over able-bodied runners. The International Association of Athletics Federations (IAAF) amended its competition rules to ban the use of "any technical device that incorporates springs, wheels or any other element that provides a user with an advantage over another athlete not using such a device". The Federation said that the amendment was not specifically aimed at Pistorius. After monitoring his track performances and carrying out tests, scientists took the view that Pistorius enjoyed considerable advantages over athletes without prosthetic limbs. On the strength of these findings, on 14 January 2008 the IAAF ruled him ineligible for competitions conducted under its rules, including the 2008 Summer Olympics. This decision was reversed by the Court of Arbitration for Sport on 16 May 2008, the Court ruling that, since he was slower out of the blocks than an able-bodied athlete there was insufficient evidence that Pistorius had an overall net advantage over able-bodied athletes.
Although eligible to compete in the 2008 Summer Olympic Games in Beijing, Pistorius did not qualify for the South African team. In his attempt to qualify for the 400 metres he achieved third place and a personal best time of 46.25 seconds in Lucerne, Switzerland, on 16 July 2008, short of the Olympic qualification time of 45.55 seconds. Nor was he selected by the South African Olympic Committee for the 4 × 400 metres relay team; four other runners had achieved better times. At the 2008 Summer Paralympics, he won gold medals in the 100, 200 and 400 metres (T44) sprints.
With his 400 metres time of 45.07 seconds on 19 July 2011, he achieved the "A" qualifying standard for the 2011 World Championships and 2012 Summer Olympics. At the Championships, he participated in the 400 metres sprint and the 4 × 400 metres relay. He was eliminated in the semifinal of the 400 metres sprint (finishing last with a time of 46.19 seconds), but, as part of South Africa's silver medal winning relay team, he became the first amputee to win an able-bodied world track medal although he was not selected for the final.
At the 2012 Summer Olympics in London, Pistorius became the first double leg amputee to participate in the Olympics when he entered the men's 400 metres race and was part of South Africa's 4 × 400 metres relay team. He also took part in the 2012 Summer Paralympics, where he entered the men's 100 metres, 200 metres and 400 metres races in the T44 classification, and in the T42–T46 4 × 100 metres relay. He won gold medals in the men's 400 metre race in a Paralympic record time of 46.68 seconds and in the 4 × 100 metres relay in a world record time of 41.78 seconds. He also took a silver in the 200 metres race, having set a world record of 21.30 seconds in the semifinal.
On 14 February 2013, he allegedly shot and killed his girlfriend, possibly mistaking her for an intruder.

Oscar Pistorius was born to Henke and Sheila Pistorius on 22 November 1986 in Sandton, Johannesburg, in what was then Transvaal Province (now Gauteng Province) of South Africa. He grew up in a Christian home, and has an elder brother, Carl, and a younger sister, Aimée. Pistorius credits his late mother, who died at the age of 43 when Pistorius was 15 years old, as a major influence in his life. He has Italian ancestry from his mother's grandfather, an Italian emigrant to Kenya.
Pistorius was born with fibular hemimelia (congenital absence of the fibula) in both legs. When he was 11 months old, his legs were amputated halfway between his knees and ankles. He attended Constantia Kloof Primary and Pretoria Boys High School where, between the ages of 11 and 13, he played rugby union in the school's third XV team, water polo and tennis. He also played water polo and tennis at provincial level. In addition, Pistorius took part in club Olympic wrestling, and trained at Jannie Brooks's garage gym in Pretoria, South Africa. After a serious rugby knee injury in June 2003, he was introduced to running in January 2004 while undergoing rehabilitation at the University of Pretoria's High Performance Centre with coach Ampie Louw, and "never looked back". His first racing blades were fitted by South African prosthetist Francois Vanderwatt. Because he was unable to find suitable running blades in Pretoria, Vanderwatt ordered some to be made by a local engineer. However, as these quickly broke, Vanderwatt referred Pistorius to American prosthetist and Paralympic sprinter Brian Frasure to be fitted for blades by Icelandic company Össur.
Pistorius began studying for a Bachelor of Commerce (B.Com.) in business management with sports science at the University of Pretoria in 2006. In a June 2008 interview for his University's website, he joked: "I won't graduate soon. With all the training I have had to cut down on my subjects. Hopefully I'll finish by the time I'm 30!" Asked by a journalist for his "sporting motto", he said: "You're not disabled by the disabilities you have, you are able by the abilities you have."
Sometimes referred to as the "Blade Runner" and "the fastest man on no legs", Pistorius took part in the 2004 Summer Paralympics in Athens and came third overall in the T44 (one leg amputated below the knee) 100-metre event. Despite falling in the preliminary round for the 200 metres, he qualified for the final. He went on to win the final with a world record time of 21.97 seconds, beating American runners with a single amputation Marlon Shirley and Brian Frasure.
In 2005, Pistorius finished sixth in the able-bodied South African Championships over 400 metres with a world-record time of 47.34 seconds, and at the Paralympic World Cup in the same year he won gold in the 100 metres and 200 metres, beating his previous 200-metre world record. At the 2006 Paralympic Athletics World Championships, Pistorius won gold in the 100, 200 and 400-metre events, breaking the world record over 200 metres. On 17 March 2007, he set a disability sports world record for the 400 metres (46.56 seconds) at the South African Senior Athletics Championships in Durban, and at the Nedbank Championships for the Physically Disabled held in Johannesburg in April 2007, he became the world record holder of the 100 and 200-metre events with times of 10.91 and 21.58 seconds respectively.
Pistorius was invited by the IAAF to take part in what would have been his first international able-bodied event, the 400-metre race at the IAAF Grand Prix in Helsinki, Finland, in July 2005. He was unable to attend, however, because of school commitments. On 13 July 2007, Pistorius ran in the 400-metre race at Rome's Golden Gala and finished second in run B with a time of 46.90 seconds, behind Stefano Braciola who ran 46.72 seconds. This was a warm-up for his appearance at the 400 metres at the Norwich Union British Grand Prix at the Don Valley Stadium in Sheffield on 15 July 2007. As American Olympic champion Jeremy Wariner stumbled at the start of the race and stopped running, Pistorius took seventh place in a field of eight in wet conditions with a time of 47.65 seconds. However, he was later disqualified for running outside his lane. The race was won by American Angelo Taylor with a time of 45.25 seconds. Pistorius had ambitions of competing in other able-bodied events. In particular, he had set his sights on competing at the 2008 Summer Olympics in Beijing, China, but was ultimately not selected by the South African Olympic Committee.