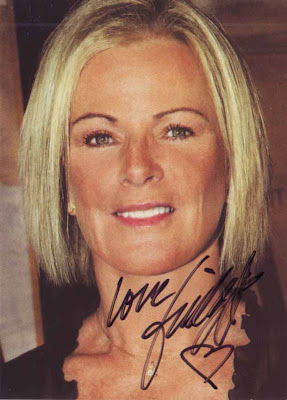 Anni-Frid Prinzessin Reuss von Plauen (born Anni-Frid Synni Lyngstad, 15 November 1945 in Bjørkåsen, Ballangen, Norway), also known as "Frida" Lyngstad, is a Norwegian/Swedish singer of Norwegian/German origin. She was one of the four members of Swedish pop group ABBA.
She is formally styled Her Serene Highness Princess Anni-Frid Synni Reuss of Plauen following her marriage to a German prince of the former sovereign House of Reuss in 1992.
Her first album, Frida, produced by her then-fiancé Andersson, was released in 1971. The album received unanimously generous praise from the critics and the press, who especially noted the precision and versatility of Lyngstad's voice. For example Swedens biggest morningpaper "Dagens Nyheter" (Daily News) wrote: "Professional, sure and certain LP-debut...low-key but self-assured personality with sprinkles of temperament, humor and tenderness. And she sings in such a way that you understand that she´s got something between her ears - she sings, in other words, in a very intelligent way".She now scored her first Swedish No.1 hit with "Min Egen Stad" ("My Own Town"). All four future members of ABBA sang back-up vocals on this song. The album is now included in the EMI compilation Frida 1967-1972.
Anni-Frid continued to play in cabarets, and tour and regularly perform on TV and radio. Subsequently, her relationship with Andersson, and friendship with Björn Ulvaeus and Agnetha Fältskog led to the formation of ABBA. In 1972, after five years at EMI Sweden, Lyngstad changed record companies and moved to the Polar Music label. She recorded the single "Man Vill Ju Leva Lite Dessemellan", which became her second No. 1 hit on the Swedish charts.
Her next solo album in Swedish, was Frida ensam (Frida Alone), produced by Benny Andersson. By now, she was already involved in ABBA. This album includes her successful Swedish version of "Fernando", which became a huge hit in Sweden. In Sweden, Frida's "Fernando" stayed at the no. 1 spot in the Svensktoppen radio charts for 9 weeks, but was never released as a single. The album was recorded between sessions of the ABBA albums "Waterloo" and "ABBA". Due to the rising popularity of the group, the album took 18 months to record. It became an enormous commercial and critical success in Sweden, topping the Swedish album charts for six weeks and remaining in the charts for 38. The album was mostly a collection of covers of songs by artists like the Beach Boys, 10cc and David Bowie, receiving positive reviews from Melody Maker: "The album portrays Frida as a very strong and emotive singer and shows the true value of the music, that if sung properly and with enough feeling it transcends all language barriers". This album was such a big success, it eventually went platinum.
At first, Lyngstad was hesitant to perform with her boyfriend Benny Andersson, his best friend Björn Ulvaeus and his girlfriend, Agnetha Fältskog.Their first project together was the cabaret act Festfolk, which flopped in the winter of 1970–1971. The following year, 'Frida' toured on her own while the other three future ABBA members started performing together on a regular basis. Eventually, she rejoined them. Andersson and Ulvaeus were busy producing other artists, but soon discovered the qualities of Lyngstad's and Fältskog's voices combined: ABBA came to life. With her warm mezzo-soprano voice, Frida contributed lead vocals to some of ABBA's biggest hits like "Fernando", "Money, Money, Money", "Super Trouper", "I Have a Dream", "Knowing Me, Knowing You" and shared lead vocals with Agnetha Fältskog on "Mamma Mia", "Waterloo", "Dancing Queen", "The Name of the Game", "Voulez-Vous", "Summer Night City" and others. She became known as 'the brunette' or 'the redhead' of the girls, always surrounded by an air of elegance and beauty. Lyngstad clearly enjoyed the spotlight more than the other three members of ABBA. She truly liked to tour and to meet audience members one-on-one. She took an active part in co-designing the famed ABBA costumes for their tours and TV performances. Since the members of ABBA went their separate ways, Anni-Frid Lyngstad has been the only one who openly regrets there never have been a reunion to date.