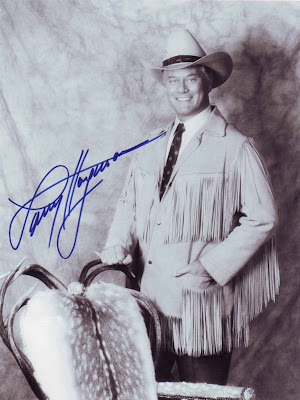 Larry Martin Hagman (September 21, 1931 – November 23, 2012) was an American film and television actor, producer and director most widely known for playing J.R. Ewing in the 1980s primetime television soap opera Dallas, which continued in a 2012 version of Dallas. He also played Major Anthony "Tony" Nelson in the 1960s sitcom I Dream of Jeannie. Hagman is the son of actress Mary Martin.

Hagman was born in Fort Worth, Texas. His mother, Mary Martin, later became a Broadway actress and his father, Benjamin Jack Hagman, was a district attorney. His parents divorced in 1936 when he was five years old. He lived with his grandmother in Texas and California. His famous mother became a contract player with Paramount in 1938 and occasionally took him to her movies.
In 1940 his mother met and married Richard Halliday and gave birth to a daughter, Heller, the following year. Hagman attended the strict Black-Foxe Military Institute (now closed). When his mother moved to New York City to continue her Broadway career, Hagman again lived with his grandmother in California. A couple of years later, his grandmother died and Hagman joined his mother in New York. At age 14 (in 1945) while attending boarding school, he began drinking heavily which led to serious health problems later in life.
In 1946 Hagman moved back to his hometown of Weatherford, where he worked on a ranch owned by a friend of his father. After attending Weatherford High School, he was drawn to drama classes and reputedly fell in love with the stage and, in particular, with the warm reception he got for his comedic roles. He developed a reputation as a talented performer and in between school terms, would take minor roles in local stage productions. Hagman graduated from high school in 1949, when his mother suggested that he try acting as a profession.
Hagman began his career in Dallas, Texas working as a production assistant and acting in small roles in Margo Jones' Theater in 1950 during a break from his one year at Bard College. He appeared in The Taming of the Shrew in New York City, followed by numerous tent show musicals with St. John Terrell's Music Circus in St. Petersburg, Florida, and Lambertville, New Jersey. In 1951, Hagman appeared in the London production of South Pacific with his mother, and stayed in the show for nearly a year.
In 1952, during the Korean War, Hagman was drafted into the United States Air Force. Stationed in London, he spent the majority of his military service entertaining U.S. troops in the UK and at bases in Europe.
After leaving the Air Force in 1956, Hagman returned to New York City where he appeared in the Off-Broadway play Once Around the Block, by William Saroyan. That was followed by nearly a year in another Off Broadway play, James Lee's Career. His Broadway debut occurred in 1958 in Comes a Day. Hagman appeared in four other Broadway plays, God and Kate Murphy, The Nervous Set, The Warm Peninsula and The Beauty Part.
During this period, Hagman also appeared in numerous, mostly live, television programs. Aged 25, Hagman made his television debut on an episode of Decoy. In 1958 he joined Barbara Bain as a guest star in the short-lived adventure and drama series Harbormaster. Hagman joined the cast of The Edge of Night in 1961 as Ed Gibson, and stayed in that role for two years. In 1964 he made his film debut in Ensign Pulver, which featured a young unknown Jack Nicholson. That same year, Hagman also appeared in Fail-Safe, opposite Henry Fonda.
Hagman died on November 23, 2012, at Medical City Dallas Hospital in Dallas following complications from throat cancer. In a statement to the Dallas Morning News, Hagman's family said "Larry's family and close friends had joined him in Dallas for the Thanksgiving holiday. When he passed, he was surrounded by loved ones. It was a peaceful passing, just as he had wished for." The New York Times described him as "one of television's most beloved villains".
Actress Linda Gray, who played Sue Ellen Ewing on Dallas, called Hagman her "best friend for 35 years", and was at his bedside when he died, her agent told the BBC. In a statement, she said: "He was the Pied Piper of life and brought joy to everyone he knew. He was creative, generous, funny, loving and talented and I will miss him enormously. He was an original and lived life to the fullest."
Actor Patrick Duffy, who played Bobby Ewing on Dallas, was also at his bedside when he died. In a statement he said: "Friday I lost one of the greatest friends ever to grace my life. The loneliness is only what is difficult, as Larry’s peace and comfort is always what is important to me, now as when he was here. He was a fighter in the gentlest way, against his obstacles and for his friends. I wear his friendship with honor."