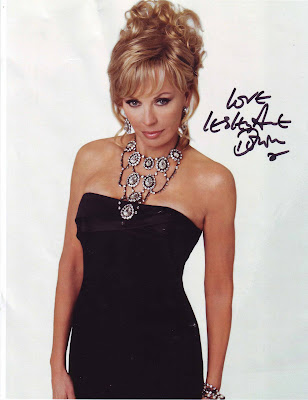 Lesley-Anne Down (born 17 March 1954) is a British film and television actress, former model and singer.
Down achieved fame as Georgina Worsley in the ITV drama series Upstairs, Downstairs (1973–75). She received further recognition for her performances in the films The Pink Panther Strikes Again (1976), A Little Night Music (1977), The First Great Train Robbery (1979), Hanover Street (1979), Sphinx (1981) and Nomads (1986). She is also known as Madeline Fabray LaMotte Main in miniseries North and South (1985–86), for which she was nominated for Golden Globe Awards in 1986.
In 1990, Down played the role Stephanie Rogers in the CBS drama series Dallas. During 1997–99 she played Olivia Blake in the NBC series Sunset Beach. Since April 2003 to February 2012, she has portrayed Jackie Marone Knight in the CBS soap opera The Bold and the Beautiful.

Email ThisBlogThis!Share to TwitterShare to FacebookShare to Pinterest
Etichete: Lesley-Anne Down