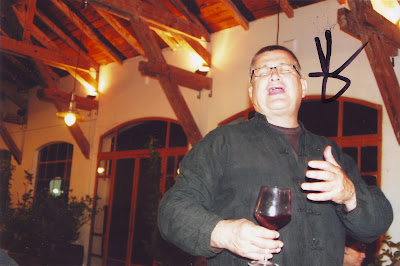 Mircea Dinescu (born November 11, 1950) is a Romanian poet, journalist and editor.
He was born in Slobozia, the son of Ştefan Dinescu, a metalworker and Aurelia (born Badea). Dinescu studied at the Faculty of Journalism of the Ştefan Gheorghiu Academy, and was considered a gifted young poet during his youth, with several poetry volumes published. His book, Moartea citeşte ziarul ("Death is reading the newspaper") was turned down in 1988 by the Communist regime's censorship apparatus in, and was then published in Amsterdam. 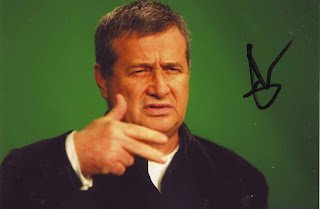 In 1989 he was fired from România Literară literary magazine, as a result of an anti-totalitarian interview against President Nicolae Ceauşescu, which Dinescu had granted to the French newspaper Libération; he was held under house arrest. 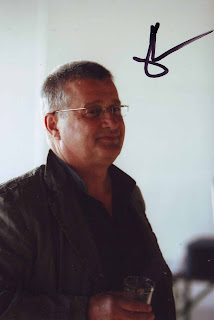 In December 1989 he took a preeminent part in the Romanian Revolution, taking part in the occupation of the National Television building by the people of Bucharest. According to popular rumors, his fellow revolutionary Ion Caramitru, unaware of being filmed, addressed Dinescu the words "Mircea, fă-te că lucrezi!" ("Mircea, pretend you are working!"); this version of events was argued by political adversaries to constitute proof that the Revolution was a carefully staged front for a coup d'état. According to the investigation of Alex Mihai Stoenescu, Caramitru actually said "Mircea, arăţi că lucrezi" ("Mircea, show them that you're working on something" — while holding Dinescu's booklet in front of camera), to which Dinescu replied "La un apel" ("[I'm working] on an appeal [to the people]") — which was indicative of their ill-preparedness and preoccupation in quickly drafting a single revolutionary proclamation on the spot.
After the fall of Communism, he co-founded Academia Caţavencu, the most famous Romanian satirical magazine. He quit the publication in 1998 and went on founding his own publications, Plai cu Boi (loosely translated as "Land of the Dumb") - a satirical Playboy-style magazine and Aspirina Săracului (The Poor Man's Aspirin - a humorous reference to sexual intercourse) - a weekly satirical magazine. 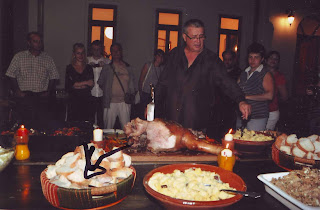 He invested a part of the money he earned from the books published into agriculture, his estate makes the wine sold under the name Vinul Moşierului ("Landowner's wine") — the name is a tongue-in-cheek reference to an ironic comment President Ion Iliescu had made about Dinescu's social status.
Dinescu remains a strong and charismatic voice of the civil society. As member of Consiliul Naţional pentru Studierea Arhivelor Securităţii (National Council for Studying the Archives of the Securitate), he is particularly concerned with exposing the former officers and collaborators of Securitate. He is also a strong critic of Communism and of Romanian leaders that had connections with the Communist regime.
Although not politically involved, he openly supported Traian Băsescu's candidature for President of Romania during the 2004 elections.
In May 2005, in collaboration with the journalist Cristian Tudor Popescu, he started a new newspaper called Gândul, with an initial circulation of 100,000 copies, but he sold his shares in July 2006. He and Stelian Tănase host a talk show on Realitatea TV (Tănase şi Dinescu).
Dinescu was appointed a Commander of the Order of the Star of Romania. In 1991, he became an Honorary Member of the University of Augsburg.