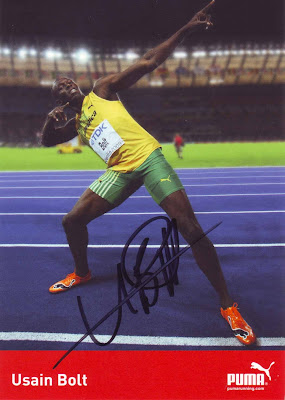 The Honourable Usain St. Leo Bolt, OJ, C.D. (born 21 August 1986), is a Jamaican sprinter and a five-time World and three-time Olympic gold medalist. He is the world record and Olympic record holder in the 100 metres, the 200 metres and (along with his teammates) the 4×100 metres relay. He is the reigning Olympic champion in these three events, and is one of only seven athletes (along with Valerie Adams, Veronica Campbell-Brown, Jacques Freitag, Yelena Isinbayeva, Jana Pittman, Dani Samuels) to win world championships at the youth, junior, and senior level of an athletic event.
Bolt won a 200 m gold medal at the 2002 World Junior Championships, making him the competition's youngest-ever gold medalist at the time (since surpassed by Jacko Gill). In 2004, at the CARIFTA Games, he became the first junior sprinter to run the 200 m in less than 20 seconds with a time of 19.93 s, breaking the previous world junior record held by Roy Martin by two-tenths of a second. He turned professional in 2004, and although he competed at the 2004 Summer Olympics, he missed most of the next two seasons due to injuries. In 2007, he broke Don Quarrie's 200 m Jamaican record with a run of 19.75 s.
His 2008 season began with his first world record performance—a 100 m world record of 9.72 s—and culminated in world and Olympic records in both the 100 m and 200 m events at the 2008 Beijing Summer Olympics. He ran 9.69 s for the 100 m and 19.30 s in the 200 m, and also set a 4×100 m relay record of 37.10 s with the Jamaican team. This made him the first man to win three sprinting events at a single Olympics since Carl Lewis in 1984, and the first man to set world records in all three at a single Olympics. The following year he further lowered his own 100 m and 200 m world records to 9.58 s and 19.19 s respectively at the 2009 World Championships. This made him the first man to hold both the 100 and 200 m world and Olympic titles at the same time.
His 2009 record breaking margin over 100 m is the highest since the start of digital time measurements. His achievements in sprinting have earned him the media nickname "Lightning Bolt", and awards including the IAAF World Athlete of the Year, Track & Field Athlete of the Year, and Laureus Sportsman of the Year.