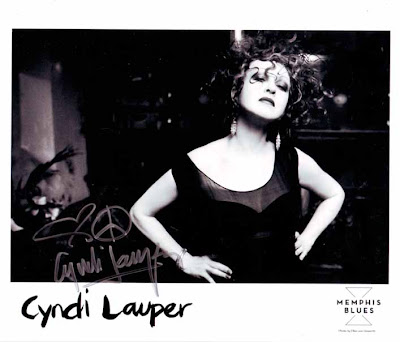 Cynthia Ann Stephanie "Cyndi" Lauper (born June 22, 1953, in Queens, New York) is an American singer, songwriter and actress. She achieved success in the mid-1980s with the release of the debut solo album She's So Unusual in 1983, which included four Billboard Hot 100 top five songs: "Girls Just Want to Have Fun," "Time After Time," "She Bop," and "All Through the Night." It became the first album in history to have four top five singles by a female, and earned Lauper Best New Artist at the 27th Grammy Awards in 1985. Her success continued with True Colors in 1986, which included two Billboard Hot 100 top ten songs: "True Colors" and "Change of Heart," and earned two nominations at the 29th Grammy Awards.
Since 1989, she has released nine studio albums to critical acclaim, her most recent 2010's Memphis Blues which became Billboard's most successful blues album of the year, remaining at number 1 for 13 consecutive weeks.
Lauper has released over 40 singles, and as of 2011 had sold more than 50 million albums worldwide, and 1 million DVDs and 20 million singles, making her one of the best selling artists of all time. She has won numerous awards, including Grammy, Emmy, MTV VMA, Billboard and AMA. In 1999, Lauper ranked No. 58 of the 100 Greatest Women of Rock & Roll by VH1.