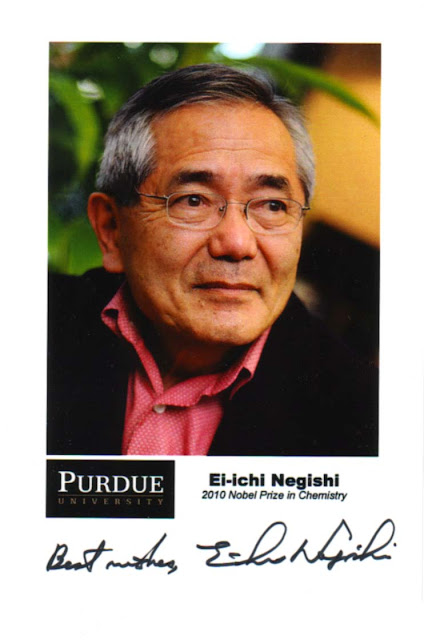 Ei-ichi Negishi (根岸 英一 Negishi Eiichi, born July 14, 1935) is a Japanese chemist who has spent most of his career at Purdue University, United States. He is best known for his discovery of the Negishi coupling. He was awarded the 2010 Nobel Prize in Chemistry "for palladium catalyzed cross couplings in organic synthesis" jointly with Richard F. Heck and Akira Suzuki.
Negishi was born in Hsinking (新京), capital of Manchukuo, now Changchun of China, and raised in Seoul of Korea under Japanese rule. He graduated from the University of Tokyo in 1958, and did his internship at Teijin. He went on to study in the United States and obtained his PhD from University of Pennsylvania in 1963 under the supervision of professor Allan R. Day. In 1966, He became a postdoctoral researcher at Purdue University, and became assistant professor in 1968, working with Nobel laureate Herbert C. Brown. In 1972, he went on to become associate professor at Syracuse University where, in 1979, he was promoted to professor. In the same year, he went back to Purdue University.
In 2000, he was awarded the Royal Society of Chemistry's Sir Edward Frankland Prize Lectureship.
In 2011, he was awarded the honorary doctor of science degree from the University of Pennsylvania