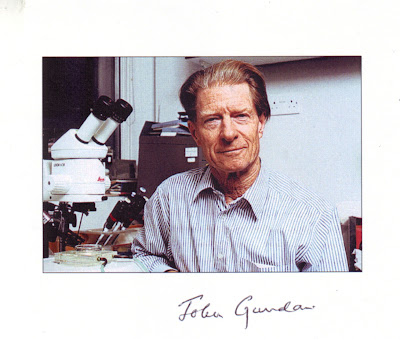 Sir John Bertrand Gurdon, FRS (born 2 October 1933) is a British developmental biologist. He is best known for his pioneering research in nuclear transplantation and cloning. He was awarded the Lasker Award in 2009. In 2012, he and Shinya Yamanaka were awarded the Nobel Prize for Physiology or Medicine for the discovery that mature cells can be converted to stem cells.
Gurdon attended Eton College, where he ranked last out of the 250 boys in his year group at biology, and was in the bottom set in every other science subject. A schoolmaster wrote a report stating "I believe he has ideas about becoming a scientist; on his present showing this is quite ridiculous." Gurdon later had this report framed; he told a reporter "When you have problems like an experiment doesn't work, which often happens, it's nice to remind yourself that perhaps after all you are not so good at this job and the schoolmaster may have been right."
Gurdon went to Christ Church, Oxford, to study classics but switched to zoology. For his D.Phil. he studied nuclear transplantation in the frog Xenopus with Michael Fischberg at Oxford. Following postdoctoral work at Caltech, he returned to England and his early posts were at the Department of Zoology of the University of Oxford (1962–71).
Gurdon has spent much of his research career at the University of Cambridge, UK, first at the MRC Laboratory of Molecular Biology (1971–83) and then at the Department of Zoology, (1983–date). In 1989, he was a founding member of the Wellcome/CRC Institute for Cell Biology and Cancer (later Wellcome/CR UK) in Cambridge, and was its Chair until 2001. He was a member of the Nuffield Council on Bioethics 1991–1995, and Master of Magdalene College, Cambridge from 1995 to 2002.
In 1958, Gurdon, then at the University of Oxford, successfully cloned a frog using intact nuclei from the somatic cells of a Xenopus tadpole. This work was an important extension of work of Briggs and King in 1952 on transplanting nuclei from embryonic blastula cells. However, he could not yet conclusively show that the transplanted nuclei derived from a fully differentiated cell. This was finally shown in 1975 by a group working at the Basel Institute for Immunology in Switzerland. They transplanted a nucleus from an antibody-producing lymphocyte (proof that it was fully differentiated) into an enucleated egg and obtained living tadpoles.
Gurdon’s experiments captured the attention of the scientific community and the tools and techniques he developed for nuclear transfer are still used today. The term clone (from the ancient Greek word κλών (klōn, “twig”)) had already been in use since the beginning of the 20th century in reference to plants. In 1963 the British biologist J. B. S. Haldane, in describing Gurdon’s results, became one of the first to use the word "clone" in reference to animals.
Gurdon and colleagues also pioneered the use of Xenopus (genus of highly aquatic frog) eggs and oocytes to translate microinjected messenger RNA molecules, a technique which has been widely used to identify the proteins encoded and to study their function.
Gurdon's recent research has focused on analysing intercellular signalling factors involved in cell differentiation, and on elucidating the mechanisms involved in reprogramming the nucleus in transplantation experiments, including the role of histone variants, and demethylation of the transplanted DNA.
Gurdon has stated that he is politically "middle of the road", and religiously agnostic because "there is no scientific proof either way". During his tenure as Master of Magdalene College, Gurdon created some controversy when he suggested that fellows should occasionally be allowed to deliver "an address on anything they would like to talk about" in college chapel services.
Gurdon was made a Fellow of the Royal Society in 1971, and was knighted in 1995. In 2004, the Wellcome Trust/Cancer Research UK Institute for Cell Biology and Cancer was renamed the Gurdon Institute in his honour. He has also received numerous awards, medals and honorary degrees. In 2005, he was elected as an Honorary Member of the American Association of Anatomists. He was awarded the 2009 Albert Lasker Basic Medical Research award.
In 2012 Gurdon was awarded, jointly with Shinya Yamanaka, the Nobel Prize for Physiology or Medicine "for the discovery that mature cells can be reprogrammed to become pluripotent".