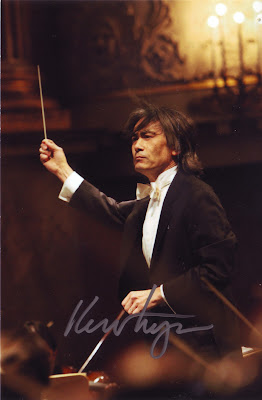 Kent George Nagano (born November 22, 1951) is an American conductor and opera administrator. He is currently the music director of the Orchestre Symphonique de Montréal and the Bavarian State Opera.
Nagano was born in Berkeley, California, while his parents were in graduate school at the University of California, Berkeley. He is a Sansei, which means that he is a third generation Japanese-American.
He grew up in Morro Bay, a city located on the Central Coast of California. He is Japanese American. He studied sociology and music at the University of California, Santa Cruz. After graduation he moved to San Francisco State University to study music. While there, he took composition courses from Grosvenor Cooper and Roger Nixon. He also studied at the École Normale de Musique de Paris.
Nagano's first conducting job was with the Opera Company of Boston, where he was assistant conductor to Sarah Caldwell. In 1978, he became the conductor of the Berkeley Symphony, his first music directorship. He stepped down from this position in 2009. During his tenure in Berkeley, Nagano became a champion of the music of Olivier Messiaen and initiated a correspondence with him.
In 1982, Nagano conducted the London Symphony Orchestra in several of Frank Zappa's completely orchestral compositions for the first time. Nagano recorded several of Zappa's pieces on the issue London Symphony Orchestra, Vol. 1, where Zappa had personally chosen Nagano to conduct the orchestra. Nagano described this as "my first chance, my first real break".
Nagano was music director of the Opéra de Lyon from 1988–1998, where he recorded, with the Lyon National Opera Orchestra and chorus, numerous works by Busoni (Doktor Faust, Arlecchino and Turandot), Stravinsky (The Rake's Progress), Offenbach (Les Contes d'Hoffmann), Debussy (world premiere of Rodrigue et Chimène), Canteloube (Chants d'Auvergne), Berlioz (La Damnation de Faust), Carlisle Floyd (Susannah), Richard Strauss (The French version of Salomé, the original version of Ariadne auf Naxos), Peter Eötvös (Trois Soeurs), Massenet (Werther), Delibes (Coppelia), Poulenc (Dialogues des Carmélites), Ravel (orchestral works), and Weill (Seven Deadly Sins).
Nagano served as principal conductor of the Hallé Orchestra in Manchester from 1992-1999. During his tenure, Nagano received criticism for his expensive and ambitious programming, as well as his conducting fees. However, poor financial management at the orchestra separately contributed to the fiscal troubles of the orchestra. His contract was not renewed after 1999.
Nagano became principal conductor and artistic director of the Deutsches Symphonie-Orchester Berlin in 2000, and served in this position until 2006. He made a number of recordings with the orchestra, including music by Ludwig van Beethoven, Arnold Schoenberg, Anton Bruckner, Alexander von Zemlinsky, and Gustav Mahler.
Nagano became principal conductor of the Los Angeles Opera (LA Opera) with the 2001-2002 season. In May 2003, Nagano was named the LA Opera's first music director, and he retained this position through 2006. He has been a regular guest at the Salzburg Festival, where he premiered Kaija Saariaho's L'amour de loin in 2000. He also conducted the world premiere of John Adams' The Death of Klinghoffer at la Monnaie in Brussels.
In 2006, Nagano became the music director of both the Orchestre Symphonique de Montréal (OSM) and the Bavarian State Opera. His contract with the Bavarian State Opera does not allow him to be the music director of another opera company. He is scheduled to conclude his Bavarian State Opera tenure in 2013. With the OSM, he has conducted commercial recordings for such labels as ECM New Series and Analekta. His current contract with the OSM is through 2016. He is also one of the Russian National Orchestra's Conductor Collegium. In August 2012, the Gothenburg Symphony Orchestra announced the appointment of Nagano as its principal guest conductor and artistic advisor, as of the 2013-2014 season, with an initial contract of 3 years. In September 2012, the Hamburg State Opera announced the appointment of Nagano as its next Generalmusikdirektor (General Music Director) and Chefdirigent (chief conductor), effective with the 2015-2016 season, with an initial contract through the 2019-2020 season.
Nagano is married to pianist Mari Kodama, and they have one daughter.