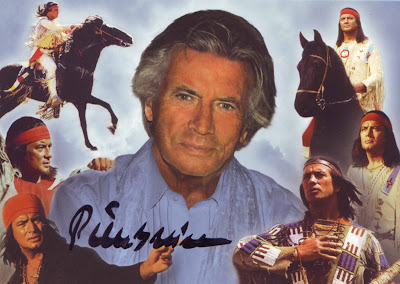 Pierre Brice (born Pierre-Louis Le Bris on 6 February 1929) is a French actor, mainly known for his role as fictional Apache-chief Winnetou in German Karl May films.
Brice was born in Brest, France. When he was 19, Brice enlisted in the French Army and fought in the First Indochina War. While patrolling in Indochina, one of his team triggered a mine and its explosion sent Brice whirling through the air, but left him virtually unhurt.
Later he served as a paratrooper during the Algerian War. From 1962 to 1968 he acted in a total of eleven West German Western movies adapted from novels by German author Karl May, in which he played the fictional Indian chief Winnetou of the Mescalero Apache tribe, alongside Lex Barker (7 movies), Stewart Granger (3 movies) and Rod Cameron (1 movie) as the white heroes.
After the films he also played this role at the Karl May Festspiele in Elspe from 1977 to 1980 and 1982 to 1986 and at the Karl May Festival in Bad Segeberg open-air theatre, Germany, from 1988 to 1991; he also worked there until 1999 as director of several open-air theatre productions. (The open-air theatre in Bad Segeberg is dedicated only to productions of Karl May plays.)
Besides theatre productions, he was mainly seen in TV-series, including "Ein Schloss am Wörthersee" (A Castle by the Woerthersee) and "Die Hütte am See" (The Cottage by the Lake). In 1979 Brice again played Winnetou in a 14-part TV series called "Mein Freund Winnetou" (My friend Winnetou – Winnetou le Mescalero), which did not originate from Karl May material.
In 1997 he appeared in a two-part TV mini series "Winnetous Rückkehr" (The Return of Winnetou), which earned devastating criticism from the fans, since the character had died in the movie "Winnetou III" and now suddenly returned to life. Again, this did not originate from writings by Karl May.
Pierre Brice tried to escape the Winnetou character in a 1976 TV series, "Die Mädchen aus dem Weltraum" (Star Maidens), and in several movies for the big screen, playing Zorro in the Italian "Zorro contro Maciste" (1963).
He also worked with Terence Hill (still called Mario Girotti at the time) in "Schüsse im Dreivierteltakt" (Shots in 3/4 Time) (1965), with Lex Barker in a non-Karl May film "Die Hölle von Manitoba" (A Place Called Glory City) (1965) and in the anthology "Gern hab' ich die Frauen gekillt" (Killer's Carnival) (1966).
Stewart Granger, Lex Barker and Pierre Brice finally worked together in one movie – but for some reason, the actors did not share a single scene in the film.
Pierre Brice recovered some audience in France with TV series "Le Dessous du ciel" alongside Marie-Georges Pascal (1974) and "Orages d'été" with Annie Girardot (1989).