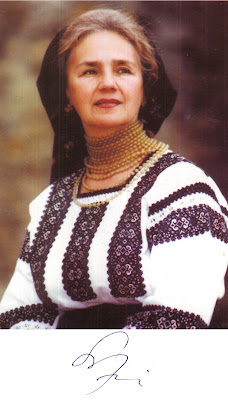 Sofia Micu (23 September 1941, Toporăuţi, judeţul Cernăuţi, today in Ukraine), known by her stage name of Sofia Vicoveanca, is a renowned Romanian singer of traditional music music from the Bucovina region.
Sofia Vicoveanca was born Sofia Fusa on 23 September 1941 in the commune of Toporăuţi (today Toporovtsy), near Cernăuţi (today Chernivtsi in Ukraine). She was one of the four children of the merchant Gheorghe Fusa and his wife Veronica.
Her childhood was marked by difficulty, her father being taken prisoner by the Soviets after the annexation of northern Bucovina by the Soviet Union. She escaped with her mother to the commune of Vicovu de Jos in the Suceava district; out of love for the village, she later changed her stage name to Sofia Vicoveanca.
Constrained by the poverty of living as a refugee, the young Sofia learned the traditional crafts of Bucovina. She graduated from the Şcoala Populară de Artă in Suceava before winning, in 1959, a competition to join the same city's "Ciprian Porumbescu" Ensemble of Song and Dance. In 1965, she released her first album. Since 1998, she has performed as a soloist with Moldavia's foremost folk music orchestra, the Ensemble "Rapsozii Botoşanilor" in Botoşani.
The repertoire of Sofia Vicoveanca includes lullabies, wedding songs, doinas of love and longing, Christmas songs, laments and ballads, but most of all songs of joy, some of them lightly admonishing or full of the humor of Romanian villages.
In the course of her career she has released ten solo albums and six collaborations, available on audio cassette, video, and CD. She has given performances around Romania and abroad, touring Israel, Portugal, the USA, France, Denmark, Germany, and the former Yugoslavia.
In recognition of her nearly fifty years of service to Romanian folk music, Sofia Vicoveanca has been honored with many distinctions, among them: "Cultural Merit," fourth class (1973); the "Tudor Vladimirescu" medal, first class (1975); "Cultural Merit," first class (1976); National Cross of "Faithful Service," third class (2002); and Grand Officer of the Order of "Cultural Merit" (2004).
She has been awarded the Honorary Citizen award in Suceava, Rădăuţi, Siret, Pojorâta, Ciocăneşti and Vicov (all in Suceava district), as well as in the commune of Ion Creangă in the Neamţ district and in Ciocârlău, Maramureş.
Sofia Vicoveanca was married to Suceava journalist Victor Micu, who died in April 2001 at the age of 70. He had worked for forty years at the newspaper "Zori noi" in Suceava. Together, Sofia and Victor had one son.