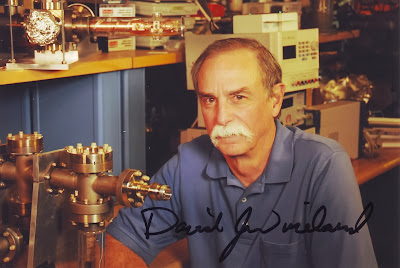 David Jeffrey Wineland (born February 24, 1944) is an American Nobel Prize-winning physicist at the National Institute of Standards and Technology (NIST) physics laboratory. His work has included advances in optics, specifically laser cooling of ions in Paul traps and use of trapped ions to implement quantum computing operations. He was awarded the 2012 Nobel Prize for Physics, jointly with Serge Haroche, for "ground-breaking experimental methods that enable measuring and manipulation of individual quantum systems."
Wineland graduated from Encina High School in Sacramento, California in 1961. He received his bachelor's degree from the University of California, Berkeley in 1965 and his PhD in 1970 supervised by Norman Foster Ramsey, Jr. at Harvard University. His doctoral dissertation is entitled "The Atomic Deuterium Maser". He then performed Postdoctoral Research in Hans Dehmelt's group at the University of Washington where he investigated electron and ion traps. In 1975, he joined the National Bureau of Standards (now called NIST), where he started the ion storage group. Wineland is also on the physics faculty of the University of Colorado at Boulder.
Wineland is a fellow of the American Physical Society, the American Optical Society, and was elected to the National Academy of Sciences in 1992. He shared the 2012 Nobel Prize in Physics with French physicist Serge Haroche "for ground-breaking experimental methods that enable measuring and manipulation of individual quantum systems."
Wineland is married to Sedna Quimby-Wineland, and they have two sons.
Sedna Helen Quimby is the daughter of George I. Quimby (1913 - 2003), an archaeologist and anthropologist, who was Professor of Anthropology at the University of Washington and Director of the Thomas Burke Memorial Washington State Museum, and his wife Helen Ziehm Quimby.