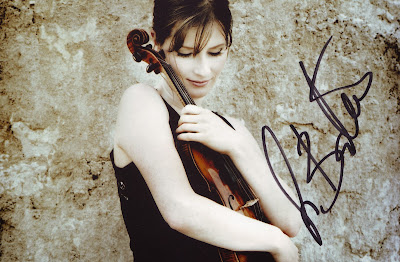 Lisa Batiashvili (Georgian: ლიზა ბათიაშვილი) (born Elisabeth Batiashvili, in 1979) is a Georgian violinist, the daughter of a violinist father and a pianist mother. Her father was her first teacher from age 4.
She later studied at the Hamburg Musikhochschule. In 1995, she was a prize winner in the International Jean Sibelius Violin Competition.

In 2006, she was the soloist in the first performances in the United States (August, world premiere) and in Sweden (October, European premiere) of the violin concerto of Magnus Lindberg, which Lindberg wrote for Batiashvili.
She has recorded the Lindberg concert as part of her recording contract with Sony Classical, which she signed in 2007.
Batiashvili and her husband, the oboist François Leleux, commissioned from Giya Kancheli the double concerto Broken Chant, which they premiered in February 2008 with the BBC Symphony Orchestra in London.
Batiashvili and Leleux reside in France with their two children. She plays the 1709 Engleman Stradivarius on loan from the Nippon Music Foundation.