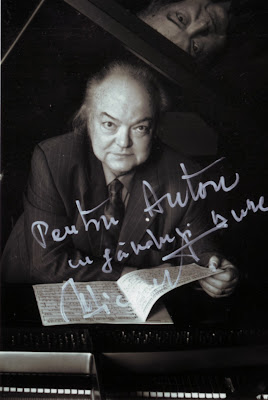 The debut of pianist, clavichordist and organ player Nicolae Licareţ took place as early as his study years, when he started to perform both in recitals and concerts. Since those early years, Nicolae Licareţ has regularly appeared in concert events in the country and abroad, enjoying the high praises and commendation of the audience and the media from all over the world.
Nicolae Licareţ was born in Bucharest and began the piano studies at the age of 5 with Natalia Iacobescu. He continued his musical training at the Music Lyceum no. 2 in Bucharest, in Maria Buzelan’s class, concurrently following the courses of Matei Basarab Lyceum. His artistic debut took place at the Dalles Hall on May 17th, 1959, when he was still a student, during a Händel festival. He benefited from the precious advice and counseling of famous professors such as Muza Ciomac, Cella Delavrancea and, later on, Florica Musicescu, in the Conservatoire. After graduating this musical institution, he participated in numerous master classes in Weimar with Hans Pischner - clavichord, Guido Agosti – piano, and in Brugge, with Isolde Ahlgrimm. At the same time, he dedicated himself to the organ study under the guidance of Iosif Gerstenengst, being afterwards praised in this domain, as well, during the many tours he effected in well known organ music centres of Europe (Munich, Madrid, Burgos, Barcelona, Perugia, Leipzig, Santiago de Compostela, Vienna, Halle, Paris).
In 1968, he joined the Bucharest Philharmonic, whose artistic director he became on January 1st, 1991. In 1973, he initiated a rich concert activity as a pianist, clavichordist and organ player, performing under the baton of conductors: Carlo Zecchi, Witold Lutoslawski, Jean Martinon, Roberto Benzi, Lawrence Foster, Igor Markevitch, Cristian Mandeal, Sergiu Comissiona. He also had the joy of cooperating in various recitals together with musicians such as Henryk Szeryng, Jean-Jacques Kantorow, Lola Bobescu, Mary Fujiwara, Daniel Podlovschi, Luigi Alva, Gheorghe Zamfir, Ileana Cotrubaş, Atsuko Temma, Cătălin Ilea, Valentin Gheorghiu, Luz Leskovitz, Mariana Nicolesco, Vladimir Orlov as his partners.
Moreover, in all these years, Nicolae Licareţ participated quite often in a number of international festivals, in Berlin, Cordoba, Sorrento, Zagreb, Halifax, Los Angeles, Brugge, Havana, Ossiah-Villach, Adelaide, Sydney, Braşov, Bangkok, Bucharest (George Enescu Festival), Ohrid, Madrid. In his capacity as a soloist, a chamber music performer, accompanist, founding member of the Concertino Quintet and currently a member of the well known Pro Arte Trio (with the residence in the Romanian Atheneum Concert Hall), Nicolae Licareţ – one of the few musicians to carry out an activity as a soloist of three keyboard instruments – played in the most important concert halls of Europe, the United States and Australia. His large repertoire, including essential works, starting with the Renaissance and Baroque music and ending with the contemporary universal and Romanian music, also contains numerous works dedicated to the three aforementioned keyboard instruments which the artist introduced to the music fans, for the first time.
As a reward for his remarkable activity, he was awarded the Meritul Cultural (Cultural Merit) Order with the Commander degree, the Italian Solidarity Star Order with the Chevalier degree and the Chevalier des Arts et Lettres Order granted by the French state. He is vice-president of the Romanian Cultural Solidarity Foundation ARS XXI and he has recently become a member of the German-Romanian Academy.
The specialised critique has always praised Nicolae Licareţ’s art, characterizing him as a „great pianist and musician,” an „ideal partner,” a „virtuoso of the clavichord,” a „brilliant pianist with a genuine culture of the sound and a dynamic discretion,” an „exceptional artist of the Baroque,” a „great colourist of the organ.” The musician has made numerous recordings at the Romanian Radio, as well as with Electrecord, Philips, AIX Records, BMG record houses.