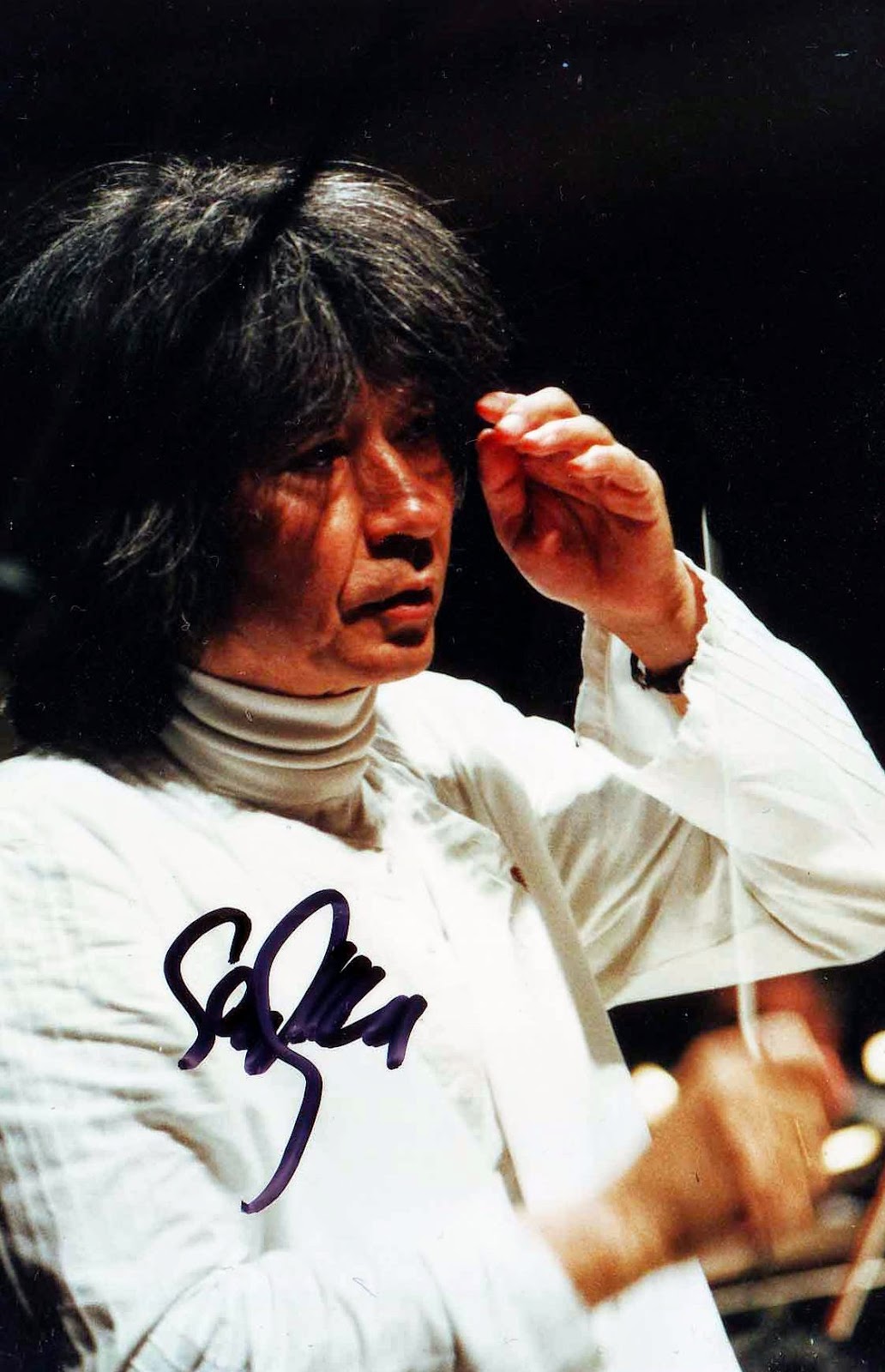 Seiji Ozawa (小澤 征爾 Ozawa Seiji?, born September 1, 1935) is a Japanese conductor, particularly noted for his interpretations of large-scale late Romantic works. He is most known for his work as music director of the Boston Symphony Orchestra and principal conductor of the Vienna State Opera.
Ozawa was born on September 1, 1935 to Japanese parents in the city of Mukden, Manchukuo (now Shenyang, China). When his family returned to Japan in 1944, he began studying piano with Noboru Toyomasu, heavily studying the works of Johann Sebastian Bach. After graduating from the Seijo Junior High School in 1950, Ozawa sprained his finger in a rugby game. Unable to continue studying the piano, his teacher at the Toho Gakuen School of Music (Hideo Saito), brought Ozawa to a life-changing performance of Beethoven's Symphony No. 5, which ultimately shifted his musical focus from piano performance to conducting. 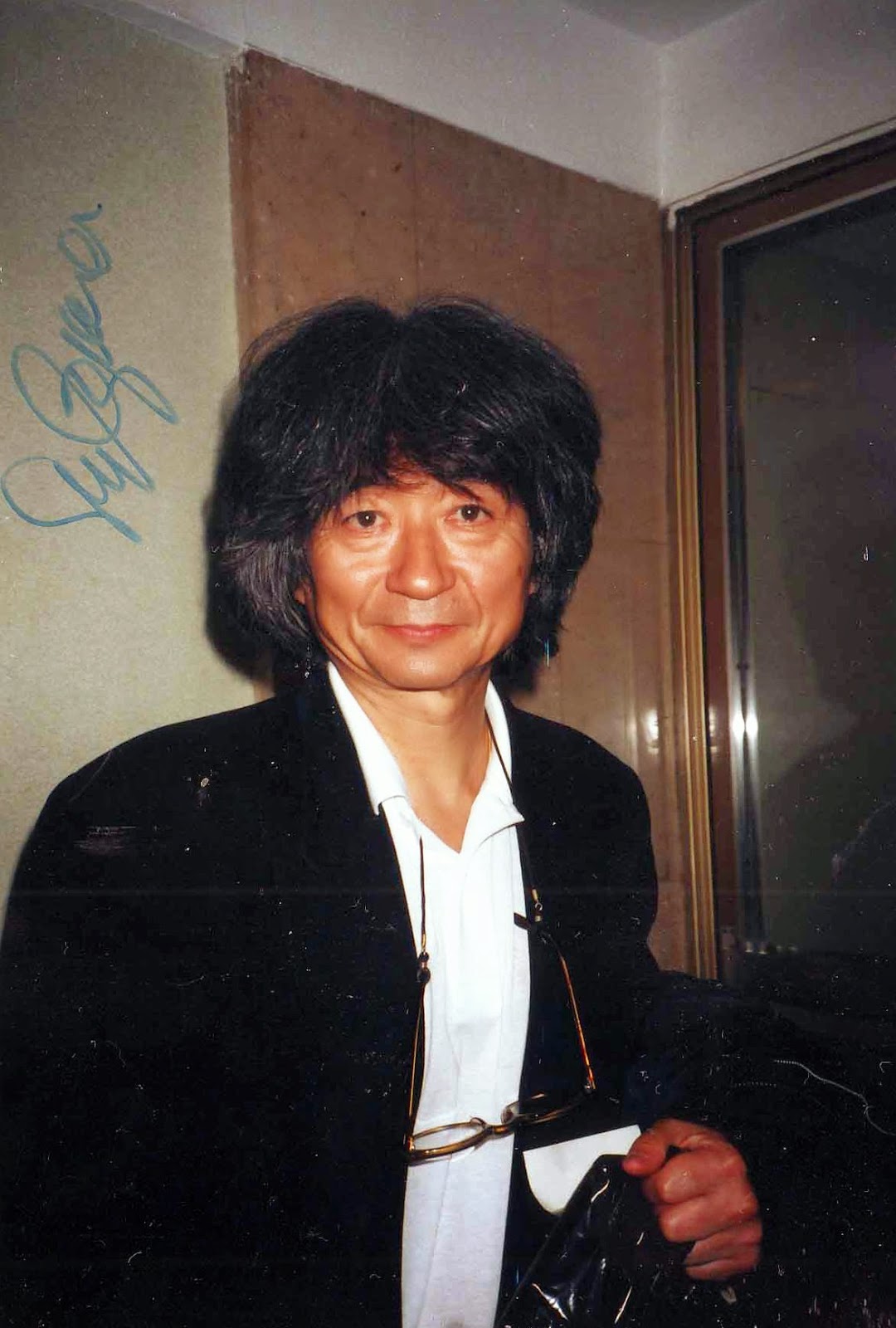 Almost a decade after the sports injury, Ozawa won the first prize at the International Competition of Orchestra Conductors in Besançon, France. His success in France led to an invitation by Charles Münch, then the music director of the Boston Symphony Orchestra, to attend the Berkshire Music Center (now the Tanglewood Music Center) where he studied with Munch and Pierre Monteux. In 1960, shortly after his arrival, Ozawa won the Koussevitzky Prize for outstanding student conductor, Tanglewood's highest honor. Receiving a scholarship to study conducting with famous Austrian conductor Herbert von Karajan, Ozawa moved to West Berlin. Under the tutelage of von Karajan, Ozawa caught the attention of prominent conductor Leonard Bernstein. Bernstein then appointed him as assistant conductor of the New York Philharmonic where he remained for the next four years. While with the New York Philharmonic, he made his first professional concert appearance with the San Francisco Symphony in 1962.
In December 1962 Ozawa was involved in a controversy with the prestigious Japanese NHK Symphony Orchestra when certain players, unhappy with his style and personality, refused to play under him. Ozawa went on to conduct the rival Japan Philharmonic Orchestra instead. From 1964 to 1971, Ozawa served as the first music director of the Ravinia Festival, the summer home of the Chicago Symphony Orchestra.
He was music director of the Toronto Symphony Orchestra from 1965 to 1969 and of the San Francisco Symphony from 1969 to 1976. In 1972, he led the San Francisco Symphony in its first commercial recordings in a decade, recording music inspired by William Shakespeare's Romeo and Juliet. In 1973, he took the San Francisco orchestra on a European tour, which included a Paris concert that was broadcast via satellite in stereo to San Francisco station KKHI. He left San Francisco after a dispute with a players committee over granting tenure to two young musicians Ozawa had selected. From 1977 to 1979, he was the resident conductor for the Singapore Philharmonic Orchestra. He returned to San Francisco as a guest conductor, including a 1978 concert featuring music from Tchaikovsky's ballet Swan Lake.
Between the years of 1964 and 1973, he directed various orchestras until he became music director of the Boston Symphony Orchestra in 1973. His tenure at the BSO was maintained for 29 years, the longest tenure of any music director, surpassing the 25 years held by Serge Koussevitzky. Ozawa won his first Emmy Award in 1976, for the Boston Symphony Orchestra's PBS television series, "Evening at Symphony." In 1994, the BSO dedicated its new Tanglewood concert hall "Seiji Ozawa Hall" in honor of his 20th season with the orchestra. In 1994, he was awarded his second Emmy for Individual Achievement in Cultural Programming for "Dvořák in Prague: A Celebration."
An effort to merge all-Japanese orchestras and performers with international artists, Ozawa, along with Kazuyoshi Akiyama, founded the Saito Kinen Orchestra in 1992. Since its creation, the orchestra has gained a prominent position in the international music community. In the same year, he also made his debut with the Metropolitan Opera in New York. He has additionally conducted the Berlin Philharmonic and Vienna Philharmonic on a regular basis. Ozawa can be seen in concert with the New Japan Philharmonic, the London Symphony, the Orchestre National de France, La Scala in Milan and the Vienna State Opera.
Ozawa caused controversy in 1996/97 with sudden demands for change at the Tanglewood Music Center, which caused Gilbert Kalish and Leon Fleisher to resign in protest. Ozawa left the position in 2002.
Ozawa has been an advocate of 20th-century classical music, giving the premieres of a number of works including György Ligeti's San Francisco Polyphony in 1975 and Olivier Messiaen's opera Saint François d'Assise in 1983. He is noted to have somewhat of a photographic memory, as he is able to memorize the scores of large works such as the Mahler symphonies.
In 2001, Ozawa was recognized by the Japanese government as a Person of Cultural Merit.
In 2002, he continued to follow in Herbert von Karajan's footsteps, as he became principal conductor of the Vienna State Opera. Ozawa continues to play a key role as a teacher and administrator at the Tanglewood Music Center, the Boston Symphony Orchestra's summer music home that has programs for young professionals and high school students.
On New Year's Day 2002, Ozawa conducted the Vienna New Year's Concert. In 2005, he conducted the Tokyo Opera Nomori's debut of Richard Strauss’ Elektra. Ozawa serves a musical role model: an Asian performer who has not only attained fame in the West but has also devoted his life to fostering a global community within classical music.
On February 1, 2006, the Vienna State Opera announced that he had to cancel all his 2006 conducting engagements because of illness, including pneumonia and shingles. He returned to conducting in March 2007 at the Tokyo Opera Nomori.
Ozawa stepped down from his post at the Vienna State Opera in 2010, to be succeeded by Franz Welser-Möst.
In October 2008, Ozawa was honored with Japan's Order of Culture; and an awards ceremony for the Order of Culture will be held at the Imperial Palace. He is a recipient of the 34th Suntory Music Award (2002) and the International Center in New York's Award of Excellence.
On January 7, 2010, Ozawa announced that he was canceling all engagements for six months in order to undergo treatments for esophageal cancer. The doctor with Ozawa at the time of the announcement said it was detected at an early stage.
He returned to work on July 26, 2010, but promptly suffered further setbacks with a lumbar hernia. In August 2011 he conducted Bartok's Bluebeard's Castle with the Saito Kinen Orchestra in Matsumoto, prior to a tour of China. After a single, successful performance, he withdrew once more with pneumonia.
Ozawa holds honorary doctorate degrees from Harvard University, the New England Conservatory, the University of Massachusetts Amherst, National University of Music Bucharest, and Wheaton College.
Ozawa became famous not only for his conducting mannerisms, but also his sartorial style: he wore the traditional formal dress with a white turtleneck rather than the usualstarched shirt, waistcoat, and white tie.