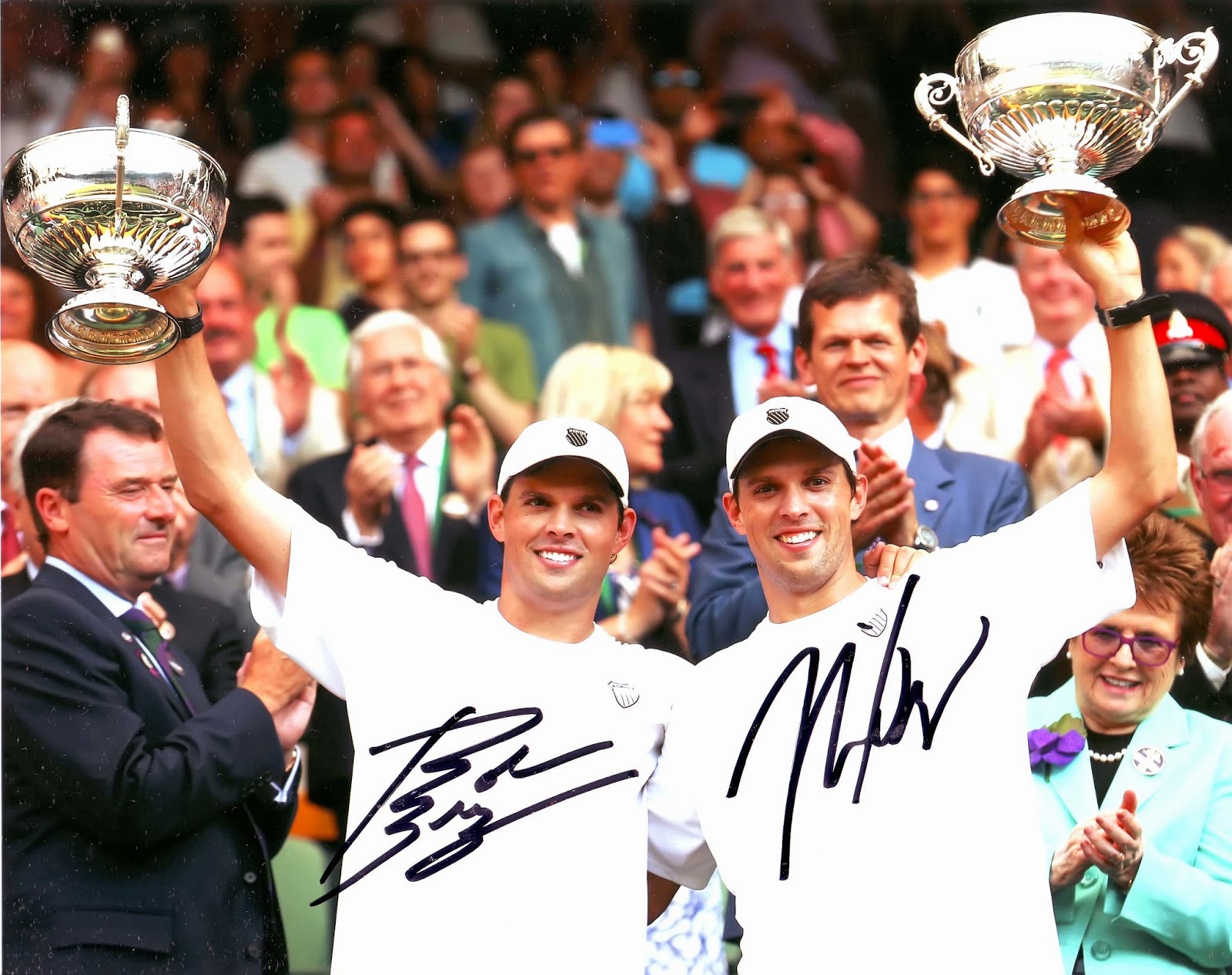 The Bryans or Bryan Brothers refers to twins Robert Charles Bryan (Bob) and Michael Carl Bryan (Mike), who are American professional doubles tennis players. The identical twins have won multiple Olympic medals, including the gold in 2012 and have won more professional games, matches, tournaments and Grand Slams than any other pairing. They have held the World No. 1 doubles ranking jointly for 367 weeks (as of June 9, 2014), which is longer than anyone else in doubles history. They have also finished the ATP year-end number 1 doubles team a record 9 times. Between 2005 and 2006, they set an Open Era record by competing in seven consecutive men's doubles Grand Slam finals. On April 11, 2013, they recorded their Open Era record 800th match win by defeating Johan Brunstrom and Jesse Levine in the semi-finals of Houston. Following their triumph at the 2013 Wimbledon Championships, the Bryans became the only doubles pairing in the Open Era to hold all four major titles at once, as well as the only team in history to hold all four majors and Olympic gold simultaneously. They are also the only doubles team in history to have won every major title, having won all four Grand Slams, Olympic Gold, all 9 Masters series titles, the Year-End Championships and the Davis Cup during their careers.

Born on April 29, 1978, with Mike being older by two minutes, and Bob taller by 3 cm, the two of them have won a record 98 tour titles surpassing The Woodies, and have been finalists on 50 other occasions. They have a Career Golden Slam and 15 grand slam titles overall, which is more than any team in the Open Era. These include victories at the Australian Open (2006, 2007, 2009, 2010, 2011 and 2013), the French Open (2003, 2013), Wimbledon (2006, 2011, 2013), and the US Open (2005, 2008, 2010 and 2012). They won the Tennis Masters Cup doubles tournament three times (2003, 2004 and 2009). They won the gold medal at the 2012 Summer Olympics in London and the bronze medal at the 2008 Beijing Olympics. They also won the 2007 Davis Cup along with Andy Roddick and James Blake. The Bryan Brothers were named ATP Team of the Decade for 2000–2009.
The twins are part of the United States Davis Cup team, with a 21–4 record in doubles matches. Their four losses were to Croatia's Ivan Ljubičić and Mario Ančić in 2005,[2] in 2008 to France's Arnaud Clément and Michaël Llodra, and in 2013 to Brazil's Marcelo Melo and Bruno Soares as well as Serbia's Nenad Zimonjić and Ilija Bozoljac. Both brothers have played Davis Cup singles matches (Bob is 4–2 and Mike is 0–1).
The brothers, who both use single-handed backhands, are noted for their attacking style of play and great hustle. They are also well known for celebrating winning points by chest-bumping each other.[3] Mike and Bob are featured on the cover of the January/February 2010 issue of Making Music where there is an article about their experiences and passion for recreational music. Some of their success is attributed to their particular brand of twinship. The Bryan brothers are "mirror twins." That is, they mirror each other's movements, one being right-handed and one left-handed. Their court coverage is vastly better than two righties/lefties. This fact was documented in the 60 minutes special on the Bryan brothers. Only about 1 in 300 live births result in monozygotic twins. Only 25% of monozygotic twins are "mirror" or opposite feature twins.
Aside from tennis, they also do charity work in aid of children in need through their foundation, The Bryan Bros. Foundation.

Email ThisBlogThis!Share to TwitterShare to FacebookShare to Pinterest
Etichete: The Bryan brothers