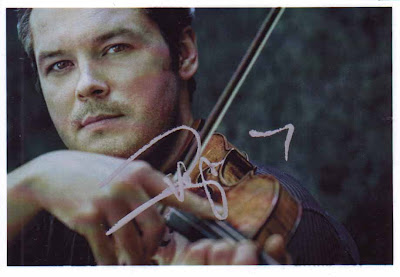 After one of Repin's performances Yehudi Menuhin once said: "Vadim Repin is simply the best and most perfect violinist that I have ever had the chance to hear."
Vadim Repin began to play the violin at the age of 5. He went on to study with Zakhar Bron, the famous violin teacher. At only eleven, he won the gold medal in all age categories in the Wienawski Competition and gave his recital débuts in Moscow and St Petersburg. In 1985 at fourteen he made his débuts in Tokyo, München, Berlin, Helsinki; a year later in Carnegie Hall.
At the age of 17, he became the youngest winner of the Queen Elisabeth Music Competition in Brussels, the world's premier violin competition. He was a member of the jury in the 2009 violin-session of this competition.

Vadim Repin has played under such leading conductors as Simon Rattle, Valery Gergiev, Mariss Jansons, and Yehudi Menuhin. He has also played with Pierre Boulez, Riccardo Chailly, Charles Dutoit, Michael Tilson Thomas (with whom he made his United Kingdom debut at The Lichfield Festival in 1985), James Levine, Kurt Masur, Edo de Waart, Esa-Pekka Salonen, Mstislav Rostropovich, and Riccardo Muti.
Repin has performed with the Berlin Philharmonic, Vienna Philharmonic, Royal Concertgebouw Orchestra, Philadelphia Orchestra and London Symphony Orchestra. He regularly collaborates with Nikolai Lugansky and Itamar Golan in recital; other chamber music partners include Martha Argerich, Evgeny Kissin, Lang Lang and Mischa Maisky.
Vadim Repin has been a frequent guest at festivals such as the BBC Proms, Tanglewood, Gstaad and Verbier. In 2010 he played the premiere of James MacMillan Violin Concerto with the London Symphony Orchestra under Gergiev which was dedicated to him.

Repin specializes in Russian music and French music, particularly the great Russian violin concertos, as well as 20th century and contemporary music. New music in his répertoire includes works by John Adams and Sofia Gubaidulina. He has recorded violin concertos by Beethoven, Brahms, Mozart, Sibelius, Tchaikovsky, Prokofiev, Shostakovich and Nikolai Myaskovsky. Repin has also made two CDs of violin and piano music works with Boris Berezovsky and has recorded chamber music with pianists Martha Argerich and Mikhail Pletnev, violist Yuri Bashmet, and cellist Mischa Maisky. In 2010, Repin recorded an album of violin sonatas with pianist Nikolai Lugansky.
The majority of Repin's recordings through 2005 were on the Erato label. However, in 2005 Repin appeared on Deutsche Grammophon (DG) on a disc of chamber music by Sergei Taneyev alongside Mikhail Pletnev, Ilya Gringolts, Nobuko Imai, and Lynn Harrell; and in April 2006 Repin signed an exclusive recording contract with DG.
Vadim Repin married his first wife Caroline Diemunsch in 2001. His son Leonardo was born in 2006.
His current wife is Svetlana Zakharova, the principal dancer of the Bolshoi Ballet.They have a daughter, born in February 2011.