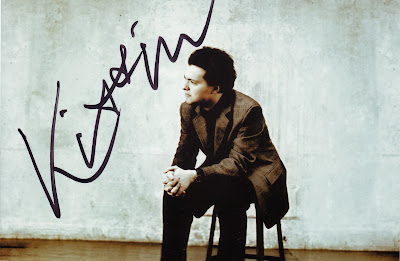 Evgeny Igorevitch Kissin (Russian: Евге́ний И́горевич Ки́син Yevgeniy Igorevich Kisin; born 10 October 1971) is a Russian classical pianist. He first came to international fame as a child prodigy. He has been a British citizen since 2002.[1] He is especially known for his interpretations of the works of the Romantic repertoire, particularly Frédéric Chopin, Sergei Rachmaninoff and Franz Liszt.
Kissin was born in Moscow to a Russian Jewish family. Recognized as a child prodigy, at age six, he began piano studies at the esteemed Gnessin State Musical College for Gifted Children. At the school, he became a student of Anna Kantor, who remained Kissin's only piano teacher.[2]

At the age of ten, Kissin made his debut performing Mozart's Piano Concerto No. 20 in D minor with the Ulyanovsk Symphony Orchestra. The year after that he gave his first recital in Moscow. Kissin's talents were revealed on the international scene in 1984, at the age of twelve, when he played and recorded both of Chopin's piano concertos with the Moscow Philharmonic Orchestra, in the Great Hall of the Moscow Conservatoire. Kissin’s first appearances outside Russia were in 1985 in Eastern Europe, followed a year later by his first tour of Japan. In 1987 he made his West European debut at the Berlin Festival as well as his United Kingdom debut, alongside conductor Valery Gergiev and violinists Maxim Vengerov and Vadim Repin, at The Lichfield Festival. In 1988 he toured Europe with the Moscow Virtuosi and Vladimir Spivakov and also made his London debut with the London Symphony Orchestra under Valery Gergiev. In December of the same year he played Tchaikovsky's Piano Concerto No. 1 with Herbert von Karajan at the Berlin Philharmonic's New Year's Eve Concert which was broadcast internationally, with the performance repeated the following year at the Salzburg Easter Festival. In September 1990, Kissin made his debut in North America playing Chopin's two piano concertos with the New York Philharmonic under Zubin Mehta and the first piano recital in Carnegie Hall's centennial season. In 1997, he gave the first solo piano recital in the history of The Proms in London.

Kissin makes regular recital tours of Europe, America and Asia. He has performed with nearly all the leading orchestras of the world, under such conductors as Claudio Abbado, Vladimir Ashkenazy, Daniel Barenboim, Sir Colin Davis, Valery Gergiev, Carlo Maria Giulini, Mariss Jansons, Herbert von Karajan, James Levine, Sir Andrew Davis, Lorin Maazel, Riccardo Muti, Seiji Ozawa, Sir Georg Solti, Yevgeny Svetlanov and Yuri Temirkanov. Kissin has also performed chamber music with Martha Argerich, Gidon Kremer, James Levine, Mischa Maisky, Thomas Quasthoff, Isaac Stern, Yuri Bashmet, and others, who admire Kissin's virtuosity.
Many musical awards and tributes from around the world have been showered upon Kissin. In 1987 he received the Crystal Prize of the Osaka Symphony Hall for the best performance of the year 1986 (his first performance in Japan). In 1991 he received the Musician of the Year Prize from the Chigiana Academy of Music in Siena, Italy. He was special guest at the 1992 Grammy Awards Ceremony, broadcast live to an audience estimated at over one billion, and became Musical America’s youngest Instrumentalist of the Year in 1995. In 1997 he received the prestigious Triumph Award for his outstanding contribution to Russia’s culture, one of the highest cultural honors to be awarded in the Russian Republic, and again, the youngest-ever awardee. He was the first pianist to be invited to give a recital at the BBC Proms (1997), and, in the 2000 season, was the first concerto soloist ever to be invited to play in the Proms opening concert. In May 2001 Kissin was awarded an Honorary Doctorate of Music by the Manhattan School of Music. In December 2003 in Moscow, he received the Shostakovich Award, one of Russia’s highest musical honors. In June 2005 he was awarded an Honorary Membership of the Royal Academy of Music in London. In March 2009 he was awarded an Honorary Doctorate of Letters from the Hong Kong University.

In addition to classical music, Kissin has given recitals of Yiddish and Russian poetry. A CD compilation of Kissin's recitals from the contemporary Yiddish poetry was issued by the Forward Association in 2010. In 2007 he became Honorary Patron of a professional chamber opera company, City Opera of Vancouver, led by conductor Charles Barber. In 2013, Evgeny Kissin received an Artist's Award from the Jewish Children's Museum in Brooklyn.
Kissin’s piano recordings have also received numerous awards and accolades, including the Edison Klassiek in The Netherlands and the Diapason d’Or and the Grand Prix of La Nouvelle Academie du Disque in France, as well as awards from music magazines throughout the world. His recording of works by Scriabin, Medtner and Stravinsky (RCA Red Seal) won him a Grammy in 2006 for Best Instrumental Soloist and, in 2002, he was named Echo Klassik Soloist of the Year. In 2010 he was awarded the Grammy for Best Instrumental Soloist Performance (With Orchestra) for his recording of Prokofiev’s Piano Concertos Nos. 2 and 3 with the Philharmonia Orchestra, conducted by Vladimir Ashkenazy (EMI Classics).
His first studio recording, in 1988 for RCA Red Seal, was of Rachmaninoff’s Piano Concerto No. 2 with Gergiev/London Symphony Orchestra, and six Etudes-Tableaux, Op. 39. Other works recorded for RCA Red Seal are two Chopin recital programs, one with the four Ballades, Barcarolle, Berceuse, and Scherzo No. 4, Op. 54, and another with the 24 Preludes Op. 28, Sonata No. 2 and Polonaise in A- flat; Beethoven’s Moonlight Sonata, Brahms’ Variations on a Theme of Paganini, and Francks’s Prelude, Choral and Fugue; Schumann’s Fantasy, Op. 17 and five Etudes d’execution transcendante by Liszt; Schumann’s Kreisleriana and the Bach-Busoni Chaconne; Bach-Busoni Toccata, Adagio and Fugue in C major, Glinka-Balakirev The Lark and Mussorgsky Pictures at an Exhibition; Schumann’s Sonata No. 1 in F sharp minor and Carnaval; and an all-Brahms disc including Sonata No. 3 in F Minor and five Hungarian dances. A duo recital with James Levine of works by Schubert was recorded live at Carnegie Hall in 2005 and released in 2006.
Other recital albums include Schubert Sonata No. 21 in B flat major and Schubert-Liszt Four Songs (BMG/RCA Victor Red Seal), Schubert Wanderer Fantasie, Brahms Seven Pieces, Op. 116, Liszt Hungarian Rhapsody No. 12 (Deutsche Grammophon) and Haydn Sonata No. 30 in A major, Sonata No. 52 in E flat major, and Schubert Sonata in A minor D784 (Sony).
Among his concerto recordings are the complete Beethoven Piano Concertos with Sir Colin Davis and the London Symphony Orchestra (EMI); Mozart Piano Concerto No 24 and Schumann Piano Concerto with Sir Colin Davis and the London Symphony Orchestra (EMI); Schumann Concerto with the Vienna Philharmonic and Giulini (Sony Classical); Beethoven Piano Concertos Nos. 2 and 5 with the Philharmonia Orchestra and Levine (Sony Classical); Prokofiev Concertos Nos. 1 and 3 with the Berlin Philharmonic and Abbado (Deutsche Grammophon) and Rachmaninoff Concerto No. 3 with the Boston Symphony and Ozawa (RCA Red Seal); Mozart Concertos Nos. 12 and 20 and Rondo in D major KV. 382, Haydn Concerto in D major, Shostakovich Concerto No. 1 with the Moscow Virtuosi and Spivakov (RCA Red Seal); Beethoven Choral Fantasy with the Berlin Philharmonic and Abbado (Deutsche Grammophon); Prokofiev Concertos Nos. 2 and 3 with the Philharmonia Orchestra and Ashkenazy (EMI Classics). A recent recording with Kremerata Baltica of Mozart Concertos Nos. 20 and 27 will be a forthcoming release on EMI.
Christopher Nupen’s documentary film, Evgeny Kissin: The Gift of Music, was released in 2000 on video and DVD by RCA Red Seal.