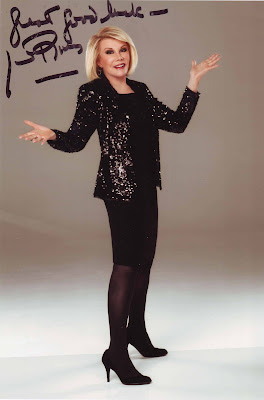 Joan Alexandra Molinsky, publicly known as Joan Rivers, (born June 8, 1933) is an American television personality, comedian, and actress. She is known for her brash manner; her loud, raspy voice with a heavy New York accent; and her numerous cosmetic surgeries. Rivers' comic style relies heavily on her ability to poke fun at herself and other Hollywood celebrities.
Joan Rivers was born Joan Alexandra Molinsky in Brooklyn, a borough of New York City, the daughter of Russian Jewish immigrants Beatrice (née Grushman; January 6, 1906 – October 1975) and Meyer C. Molinsky (December 7, 1900 – January 1985). She was raised in Brooklyn, New York, and her family later moved to Larchmont, in Westchester County, New York. She attended Connecticut College between 1950 and 1952 and graduated from Barnard College in 1954 with a bachelor-of-arts degree in English literature and anthropology. Before entering show business, Rivers worked at various jobs such as a tour guide at Rockefeller Center, a writer/proofreader at an advertising agency and as a fashion consultant at Bond Clothing Stores. During this period, the agent Tony Rivers advised her to change her name, so she chose Joan Rivers as her stage name.