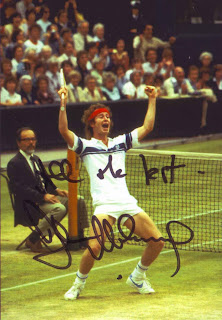 John Patrick McEnroe, Jr. (born February 16, 1959) is a former world no. 1 professional tennis player from the United States. During his career, he won seven Grand Slam singles titles (three at Wimbledon and four at the US Open), nine Grand Slam men's doubles titles, and one Grand Slam mixed doubles title. McEnroe also won a record eight season ending championships, comprising five WCT Finals titles and three Masters Grand Prix titles from twelve final appearances at these two events, a record he shares with Ivan Lendl. He posted the best single season win-loss record in the Open Era in 1984 at 96.47% (82/3). In addition he won 19 Championship Series top tier events of the Grand Prix Tour that were the precursors to the current Masters 1000.

He is best remembered for his shot-making artistry and superb volleying; for his famous rivalries with Björn Borg, Jimmy Connors and Ivan Lendl; for his confrontational on-court behavior which frequently landed him in trouble with umpires and tennis authorities; and for the catchphrase "You cannot be serious!" directed toward an umpire during a match at Wimbledon in 1981.
He was inducted into the International Tennis Hall of Fame in 1999, and is regarded as one of the greatest tennis players of all time.
McEnroe is the older brother of Patrick McEnroe, who is also a former professional tennis player and the former Captain of the United States Davis Cup team, a position in which John served previously. They also both are now often commentators for Grand Slam tennis television coverage in the United States, and John McEnroe is also a commentator on Wimbledon for the BBC.