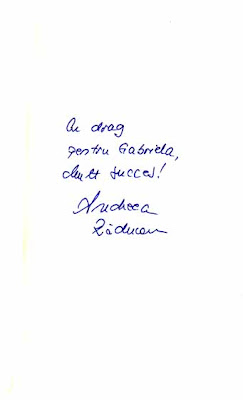 Andreea Mădălina Răducan (born 30 September 1983) is a retired gymnast from Bârlad, Romania.
Răducan began competing in gymnastics at a young age and was training at the Romanian junior national facility by the age of 12½. As one of the standout gymnasts of the Romanian team in the late 1990s, Răducan was known for both her difficult repertoire of skills and her dance and presentation. Over the course of her four-year senior career, she won Olympic or World Championships medals on every event except the uneven bars and earned three individual World Championships titles, on the floor exercise in 1999 and 2001 and the balance beam in 2001.
Răducan competed at the 2000 Sydney Olympics, where she contributed heavily to the Romanian team's gold medal and won an individual silver medal on the vault. She was also the original winner of the all-around title, but was disqualified and stripped of her gold medal shortly after the competition concluded, when it was revealed that she had failed doping controls, testing positive for pseudoephedrine, at the time a banned substance. She and her coaches maintained that she had been given the substance in two cold medicine pills by a Romanian team physician, and that they had not impacted her performance in any way.
The case generated a significant amount of media attention, and Răducan was supported by members of the gymnastics community and the Romanian public. Her case was brought to the Court of Arbitration for Sport in the fall of 2000. Răducan herself was exonerated of any personal wrongdoing by the CAS, the Romanian Olympic Committee and the International Gymnastics Federation, and was not subject to any disciplinary measures. However, her medal was not reinstated, and the team doctor who administered the medicine was banned for two Olympic cycles.
Răducan returned the year after the Olympics to win five additional World Championships medals, but retired from gymnastics in 2002. As an adult, she has worked as a sports announcer and media personality, and has pursued University level studies in journalism.