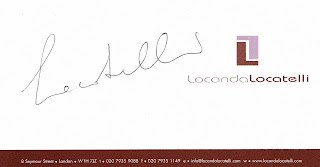 Locatelli was brought up in Corgeno on the banks of Lake Comabbio, Italy. His uncle ran a restaurant, giving him an appreciation and understanding of food from an early age. After working for a short spell in local restaurants in North Italy and Switzerland, Locatelli came to England in 1986 to join the kitchens of Anton Edelmann at The Savoy. In 1990, Locatelli moved to Paris and worked at Restaurant Laurent and La Tour D’Argent.
On his return to London a couple of years later, Locatelli became head chef at Olivo, Eccleston Street, before opening Zafferano in February 1995.
Locatelli cooking at Zafferano quickly became the toast of London. He won "Best Italian Restaurant" at the London Carlton Restaurant Awards for two consecutive years and his first Michelin star in 1999.His cooking aims to highlight the natural flavours of quality produce, much of which he imports directly from Italy. He opened his second restaurant, Spighetta, on Blandford Street, in July 1997 and its sister restaurant Spiga, on Wardour Street, in March 2009.
Locatelli is considered by many to be one of the best Italian chefs in the UK. His Locanda Locatelli restaurant serves traditional Italian dishes. Locanda Locatelli has won a Michelin star in 2003 which has since been retained.
Locatelli has featured in three TV series: Pure Italian, 2002, aired on the UK Food channel, Tony and Giorgio, filmed with entrepreneur Tony Allan, shown on BBC2 and Sicily Unpacked, with art historian Andrew Graham-Dixon. Tony and Giorgio was accompanied by a tie-in book. His own cookery book, Made in Italy, was published in September 2006. Made in Italy has received the Best Food Book award at the Glenfiddich Food and Drink Awards 2007. A second book, Made in Sicily, was published in September 2011.
In 2002, on the 14th of February, Giorgio and his wife Plaxy, opened his first independent restaurant, Locanda Locatelli, in Seymour Street. The restaurant has been awarded a Michelin star in 2003, which has been retained eight times, in 2004, 2005, 2006, 2007, 2008, 2009, 2010 and 2011.