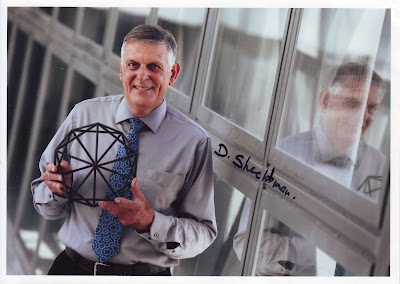 Dan Shechtman (Hebrew: דן שכטמן; born January 24, 1941 in Tel Aviv) is the Philip Tobias Professor of Materials Science at the Technion – Israel Institute of Technology, an Associate of the US Department of Energy's Ames Laboratory, and Professor of Materials Science at Iowa State University. On April 8, 1982, while on sabbatical at the U.S. National Bureau of Standards in Washington, D.C., Shechtman discovered the icosahedral phase, which opened the new field of quasiperiodic crystals. He was awarded the 2011 Nobel Prize in Chemistry for "the discovery of quasicrystals". Shechtman is the fourth Israeli to win the Nobel Prize in Chemistry in under a decade.