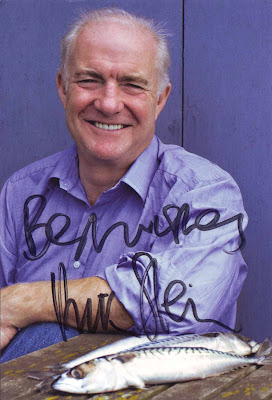 Christopher Richard "Rick" Stein OBE (born 4 January 1947) is an English chef, restaurateur and television presenter. He is currently the head chef and co-owner of "Rick Stein at Bannisters" at Mollymook, New South Wales, Australia, owns four restaurants in Padstow, a fish and chip shop in Falmouth, Cornwall and has written or presented a number cookery books and television programmes.
Of German descent, Stein was born in Oxfordshire to Eric and Dorothy Stein, and attended Uppingham School and studied English at New College, Oxford. Later, he moved to Padstow, Cornwall where he had spent many childhood holidays.
Stein opened his first business in Padstow in 1974, and now specialises in fish cookery. His business operates four restaurants, a bistro, a cafe, a seafood delicatessen, patisserie shop, a gift shop and a cookery school. His impact on the local economy of Padstow is such that it has been nicknamed "Padstein" despite the phrase being openly disputed by Rick himself.
In 2009 Stein made his first acquisition in the nearby trading village of St Merryn, which is 3.5 miles from Padstow. When taking over the Cornish Arms public house, which is located on the outskirts of St Merryn, Stein's stated aim was to 'keep it a traditional Cornish pub'.
On 1 October 2009, Stein opened with his fiancee publicist Sarah Burns, "Rick Stein at Bannisters" in Mollymook, on the South Coast of New South Wales, Australia. Rick said at the time of opening, “Ever since a memorable weekend eating Pambula oysters and flathead in Merimbula in the sixties, I’ve had the image of the clean blue sea and sweet seafood of the South Coast fixed in my head so when I was introduced to Mollymook about six years ago I knew that one day I would open up a restaurant celebrating local fish and shellfish but keeping it really simple. Bannisters was the relaxed seaside hotel that I was looking for, so when they asked me if I’d be interested in cooking there I jumped at the opportunity.”
As well as running his business, Stein has become a popular television presenter on food. Gaining early exposure after appearing on Keith Floyd's 1984 series Floyd On Fish as a guest chef, he was noticed by the show's producer and was later offered the chance to present his own series – similar in vein to the "travelogue" style of cookery show pioneered by Floyd – on BBC television including Rick Stein's Taste of the Sea, Fruits of the Sea, Seafood Odyssey, Fresh Food, Seafood Lovers' Guide, Food Heroes, and in 2005 French Odyssey about a memorable journey down the canals of South Western France to the Mediterranean, Mediterranean Escapes. This starts where French Odyssey left off, and explores the Mediterranean coastline and islands in search of the best in the region's foods. Rick Stein's Far Eastern Odyssey, travelling around Malaysia, Cambodia, Thailand, Vietnam and Indonesia. His last culinary travel television programme (2011) was about regional cuisines of Spain. Stein was often accompanied by his Jack Russell terrier, Chalky, who died in January 2007.
A book has accompanied each series, and his book English Seafood Cookery won the Glenfiddich Award for Food Book of the Year in 1989. Stein was awarded the OBE in the 2003 New Year Honours list for services to tourism in Cornwall.
Stein lives in Padstow, Cornwall for part of the year but also has a house in Sydney with his wife, Sarah Stein and her two children. He has three sons from his marriage to his business partner Jill, which ended in 2002, their divorce was granted on 8 June 2007.
When Stein was eighteen his father committed suicide in Cornwall after suffering from bipolar disorder Stein's brother, Professor John Stein teaches and researches medicine, and in particular dyslexia and neurophysiology, at Oxford University, where he is a fellow of Magdalen College, Oxford. He also has a sister Henrietta and a half brother Jeremy who was from his mother's first marriage.
Stein and his ex-wife Jill jointly built up the food business which today is valued at £32 million, and employs approximately 450 people in Padstow.
Rick Stein is Patron of the charities Padstow Youth Project, South West PESCA (Duchy Fish Quota Co.), the National Mission for Deep Sea Fishermen, the National Coastwatch Institution, the Dyslexia Research Trust and The National Trust.