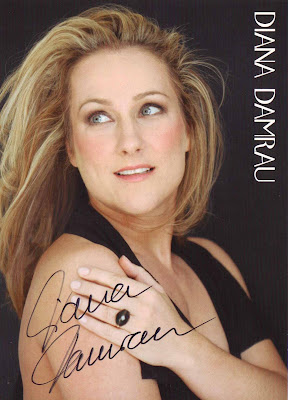 Diana Damrau (born 31 May 1971 in Günzburg, Bavaria) is a German soprano opera singer.
Diana Damrau was born in 1971 in Günzburg, Bavaria, Germany, and began her operatic studies with Carmen Hanganu at the Musikhochschule in Würzburg. After graduating from music conservatory she worked in Salzburg with Hanna Ludwig. Her first operatic engagements were in Würzburg and subsequently the National Theatre Mannheim and Oper Frankfurt. Since then, she has sung throughout the world at venues such as the Vienna State Opera, the Metropolitan Opera New York, the Royal Opera House, the Bavarian State Opera and the Salzburg Festival. She was invited to sing the title role in Antonio Salieri's Europa riconosciuta at the re-opening of La Scala, Milan in 2004, under the baton of Riccardo Muti.
The Queen of the Night from Mozart's The Magic Flute has been Damrau's most frequently performed role to date, as she has been engaged to perform it in over 15 productions at houses including Covent Garden, the Salzburg Festival, the Vienna State Opera, Oper Frankfurt and the Bavarian State Opera, Munich. Damrau made Metropolitan Opera history in the 2007/2008 season by appearing as both Pamina and Queen of the Night in different performances of the same run. Another notable engagement was her assumption of all four heroines in Offenbach's Les contes d'Hoffmann in a new production at the Bavarian State Opera in October 2011. Other coloratura roles in her repertoire include Zerbinetta, Lucia, Elvira, Rosina, Gilda, Adina, Marie, Linda and Aminta. She also performs roles in the lyric repertoire including Manon, Donna Anna, Gretel and Pamina.
Damrau has furthered her exploration of the bel canto repertoire in recent years with highlights including new productions of Rossini's comic opera Le comte Ory at the Metropolitan Opera and the title role in Donizetti's Linda di Chamounix at the Liceu, Barcelona. The soprano has since returned to the Metropolitan Opera as both Adina and Rosina and brought her portrayal of Donizetti's Lucia to Berlin and Vienna. Expecting her second child in Autumn 2012, Damrau will return to the stage with a new production of Verdi's Rigoletto at the Metropolitan Opera in February 2013, followed by her role debut in the title role of Verdi's La traviata in the same house. Later in the year will see the world premiere of A Harlot's Progress, an opera written for her by young British composer Iain Bell based on the etchings of William Hogarth, which will receive its premiere in Vienna's Theater an der Wien.
As well as performing in operas, Damrau is a regular on the concert stage. She has performed Lieder repertoire at Vienna's Musikverein, at Carnegie Hall, Wigmore Hall, La Scala, the Schubertiade in Schwarzenberg, Austria, and both the Munich and Salzburg Festivals. Her concert repertoire includes Carl Orff's Carmina Burana, Mozart's Great Mass in C minor, Requiem and Exsultate, jubilate as well as Handel's Messiah. She has performed with such esteemed conductors as James Levine, Zubin Mehta, Lorin Maazel, Sir Colin Davis, Christoph von Dohnányi, Leonard Slatkin, Pierre Boulez, Nikolaus Harnoncourt and Jesús López-Cobos.