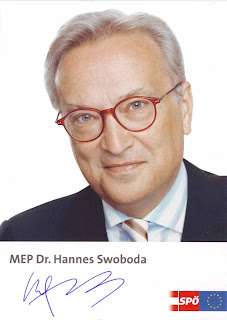 Hannes Swoboda (born 10 November 1946 in Bad Deutsch-Altenburg) is an Austrian social democratic politician. He has been a Member of the European Parliament since 1996. Within the Parliament, he represents the Social Democratic Party of Austria and since 17 January 2012 is also the President of the group of the Progressive Alliance of Socialists and Democrats.
After studying law and economics at the University of Vienna, Swoboda worked in the Vienna Chamber of Labour (1971–86) and was director of the department for urban policies and housing policy. Swoboda also held a number of different functions within the Social Democratic Party of Austria (SPÖ). From 1983, he was a member of the municipal council and member of the city council of Vienna. In 1988 he became municipal councillor, regional minister, responsible for urban development, planning, transport and external relations. Swoboda is a member of the federal party executive committee of the SPÖ and the Viennese party executive committee. He is also a member of the Parliamentarian Working Group of the Advisory Board of "A Soul for Europe", an initiative that is building an international network with bases in Amsterdam, Berlin, Belgrade, Brussels, Porto and Tbilisi. Hannes Swoboda supported the European cause by signing the Spinelli Group Manifesto. In the European Parliament he is Member of the Committee on Foreign Affairs (Rapporteur for Russia), Substitute Member in the Committee on Energy, Research and Industrial Policies, Member of the Delegation for the Relations to the United States of America, Member of the Delegation to the Parliamentary Cooperation Committees in Central Asia.
Since 1997, Swoboda has been the vice-president of the European Parliament's delegation for relations with south-east Europe. Much of his parliamentary work is focused on the Balkans - he is chairman of the Parliamentarian Working Group on Western Balkans -, the Middle East, Turkey and the Maghreb. He was rapporteur for the Accession of Croatia to the European Union. In December 2011 he recommended Croatia's accession to the European Parliament which voted in favor with a great majority. Besides the above mentioned, Swoboda focuses in his work in the Committee of Foreign Affairs on Central Asia and Russia.
After being leader of the Austrian Delegation of Socialdemocrats in the European Parliament, Swoboda became first Vice-President of the Progressive Alliance of Socialists and Democrats in the European Parliament an their Parliamentary Secretary.
Besides his involvement in Foreign Affairs, Swoboda focuses on economic policies and questions of inclusion, as well as the fight against the rising right wing extremism in Europe. He worked on the question of Roma discrimination in Europe, Swoboda went on several fact finding missions to get to know the situation. The experiences are discussed in his recently published book: Roma - A European Minority.