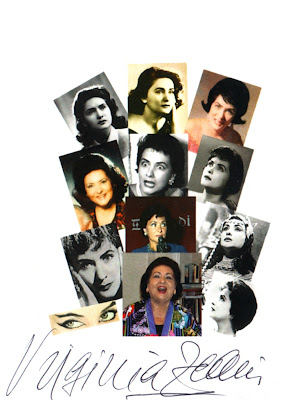 Virginia Zeani (born 21 October 1925) is a Romanian soprano, particularly associated with the Italian repertory, especially the role of (Violetta) in La traviata.
Zeani was born Virginia Zehan, in Solovăstru, Romania. She studied first in Bucarest, with Lucia Anghel, then with famed coloratura soprano Lydia Lipkowska. Her singing for the Italian Cultural Society in Bucarest so impressed the Italian Ambassador, the Consul and the Press Attaché that they quickly arranged for her to study in Italy, and in March 1947 she travelled to Milan to work with the great tenor Aureliano Pertile.
With no previous stage experience, in May 1948 she made her professional debut in Bologna, deputising at short notice for Margherita Carosio as Violetta in La traviata, and was immediately offered a tour of thirty more performances. Violetta was a role she would sing an estimated 648 times around the world, during her career. Her partner that evening was tenor Arrigo Pola (Alfredo), the voice teacher of Luciano Pavarotti.
Her career was at first primarily focused in Italy, where she sang in many of the regional opera houses. She describes these years as "making the bones", singing many performances of big roles in smaller houses to gain strength and experience.
In January 1950 she was invited to star in a three month "tournee", or season, in Cairo and Alexandria in Egypt, singing Violetta, Nedda, Michaela and most significantly Adina in L'elisir d'amore opposite the great Italian tenor Beniamino Gigli. She was 24, he was 60.
In 1952 came an important step when, again at short notice, conductor Tullio Serafin chose her to replace Maria Callas as Elvira in i Puritani in the Teatro Communale in Florence. Soon her growing reputation led to invitations to many of the major opera houses of Europe, and Violetta was her debut role in Vienna, and Paris. She made her debut at La Scala, Milan in 1956, as (Cleopatra) in Handel's Giulio Cesare, opposite Nicola Rossi-Lemeni, whom she married shortly afterwards.
Despite having appeared in several successful tours of Great Britain she had yet to appear at Covent Garden. Her debut eventually came in 1960, once again as an emergency replacement, but this time for the indisposed Joan Sutherland. She recalls arriving at the Royal Opera House at 4pm, after a sleepless night and flights from Vienna via Frankfurt. There was just time for costume fittings and a brief rest before she walked, for the very first time, onto the Covent Garden stage. She had never before met any of the cast and had to ask "Which one is my Alfredo?" That remarkable performance was broadcast world-wide and has been preserved on disc. Zeani also appeared in Barcelona, Leningrad, Moscow, Philadelphia, Bucharest etc. and eventually in New York's Metropolitan Opera, as Violetta, in 1966.
In her early career she won considerable success in bel canto roles such as Lucia di Lammermoor, (Gilda) in Rigoletto, (Elvira) in I Puritani, and the title role in Linda di Chamounix, and lighter lyric roles such as Massenet's ("Manon") and (Marguerite) in Gounod's Faust. As her voice matured she gradually turned to more dramatic roles including Puccini's Manon Lescaut, Madama Butterfly and Tosca, and verismo operas including Fedora and Adriana Lecouvreur. She tackled more Verdi roles including (Aida), (Desdemona), (Elisabetta), (Alzira) and (Lina) in Stiffelio, as well as two Wagnerian heroines, (Elsa) in Lohengrin and (Senta) in The Flying Dutchman.
She created the role of (Blanche) in Poulenc's Dialogues des Carmélites in 1957 at La Scala, later performing his solo masterpiece for soprano La Voix Humaine.
In 1972 she enjoyed one of her greatest successes as Magda in Gian Carlo Menotti's The Consul.
In all she sang some 69 major roles and only ever cancelled two performances.
She sang with many famous colleagues including tenors Beniamino Gigli, Mario Filippeschi, Ferruccio Tagliavini, Carlo Bergonzi, Nicolai Gedda, Alfredo Kraus, Jon Vickers, Luciano Pavarotti, and Plácido Domingo, mezzo sopranos Giulietta Simionato, Fedora Barbieri, Shirley Verrett, Lili Chookasian, Grace Bumbry, baritones Gino Bechi, Tito Gobbi. Nicolae Herlea and basses Nicola Rossi-Lemeni, Boris Christoff, etc. A warm-voiced singer with stunning looks and an affecting stage presence, she made few commercial recordings, but many of her live performances exist as bootleg recordings and YouTube postings.
Zeani retired from the operatic stage in 1982, but, together with her husband, Nicola Rossi Lemeni, in 1980 began to teach singing at the music school in Indiana University in Bloomington, Indiana. The couple were later both honored as "Distinguished Professors". After her husband's death in 1991 she taught at IU for many more years before moving to Florida where she continues to teach talented young singers, In 2010, having now taught for thirty years, the magazine Classical Singer named her Teacher of the Year.
Amongst Zeani's most famous pupils are Sylvia McNair, Susan Patterson, Angela Brown, Stephen Mark Brown, Elizabeth Futral, Marilyn Mims, Vivica Genaux, Mark Nicolson, Heidi Klassen, James Valenti Elīna Garanča and Ailyn Perez.
She was the recipient of many major awards including Commendatore of the Italian Republic. In 2010, King Michael of Romania awarded her his highest honour, "Nihil sine Deo", and in May 2011 she travelled to the Elisabeta Palace in Bucharest where he invested her with the award.