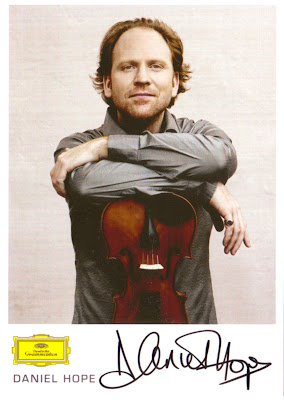 Daniel Hope was born in Durban in 1974. When he was six months old, his father, the distinguished novelist, poet and anti-apartheid activist Christopher Hope, was finally granted an exit visa. The family went first to Paris, then to London, where Daniel’s mother Eleanor was engaged by Yehudi Menuhin to be his secretary, later becoming the celebrated violinist and conductor’s long-time manager. In 1978 Hope began to study the violin in London with Sheila Nelson. Six years later he commenced his studies at the Royal College of Music with Itzhak Rashkovsky, Felix Andrievsky and Grigory Zhislin and appeared on British television. In 1985 he was invited by Menuhin to perform the Bartók Duos for German television, which began a long association between the two violinists that included over 60 concerts. From 1992–1998 he was a pupil of Zakhar Bron at London’s Royal Academy of Music, from which he graduated. Daniel Hope has appeared all over the globe with the world’s most renowned orchestras and conductors and has won numerous prizes for his recordings such as five Echo Awards, the Classical Brit Award, Deutscher Schallplattenpreis andnumerous Grammy® nominations.