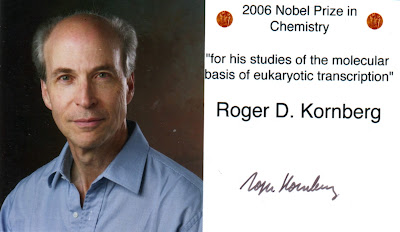 Roger David Kornberg (born April 24, 1947) is an American biochemist and professor of structural biology at Stanford University School of Medicine.
Kornberg was awarded the Nobel Prize in Chemistry in 2006 for his studies of the process by which genetic information from DNA is copied to RNA, "the molecular basis of eukaryotic transcription."
Kornberg was born in St. Louis, Missouri, the son of Sylvy Ruth (Levy) and biophysicist Arthur Kornberg, who won the Nobel Prize. He earned his bachelor's degree in chemistry from Harvard University in 1967 and his Ph.D. in chemical physics from Stanford in 1972. He became a postdoctoral fellow at the Laboratory of Molecular Biology in Cambridge, England and then an Assistant Professor of Biological Chemistry at Harvard Medical School in 1976, before moving to his present position as Professor of Structural Biology at Stanford Medical School in 1978. His closest collaborator has been his wife, Professor Yahli Lorch.
All organisms are controlled by their genes, which are coded by DNA, which is copied to RNA, which creates proteins, which are sequences of amino acids. DNA resides in the nucleus. When a cell expresses a gene, it copies (transcribes) that gene's DNA sequence onto a messenger RNA (mRNA) sequence. mRNA is transported out of the nucleus to ribosomes. The ribosomes read the mRNA and translate the code into the right amino acid sequence to make that gene's protein.
The DNA is transcribed to mRNA by an enzyme, RNA polymerase II, with the help of many other proteins. Using yeast, Kornberg identified the role of RNA polymerase II and other proteins in transcribing DNA, and he created three-dimensional images of the protein cluster using X-ray crystallography. Polymerase II is used by all organisms with nuclei, including humans, to transcribe DNA.
Kornberg and his research group have made several fundamental discoveries concerning the mechanisms and regulation of eukaryotic transcription. While a graduate student working with Harden McConnell at Stanford in the late 1960s, he discovered the "flip-flop" and lateral diffusion of phospholipids in bilayer membranes. While a postdoctoral fellow working with Aaron Klug and Francis Crick at the MRC in the 1970s, Kornberg discovered the nucleosome as the basic protein complex packaging chromosomal DNA in the nucleus of eukaryotic cells (chromosomal DNA is often termed "Chromatin" when it is bound to proteins in this manner, reflecting Walther Flemming's discovery that certain structures within the cell nucleus would absorb dyes and become visible under a microscope). Within the nucleosome, Kornberg found that roughly 200 bp of DNA are wrapped around an octamer of histone proteins.
Kornberg's research group at Stanford later succeeded in the development of a faithful transcription system from baker's yeast, a simple unicellular eukaryote, which they then used to isolate in a purified form all of the several dozen proteins required for the transcription process. Through the work of Kornberg and others, it has become clear that these protein components are remarkably conserved across the full spectrum of eukaryotes, from yeast to human cells.
Using this system, Kornberg made the major discovery that transmission of gene regulatory signals to the RNA polymerase machinery is accomplished by an additional protein complex that they dubbed Mediator. As noted by the Nobel Prize committee, "the great complexity of eukaryotic organisms is actually enabled by the fine interplay between tissue-specific substances, enhancers in the DNA and Mediator. The discovery of Mediator is therefore a true milestone in the understanding of the transcription process."
At the same time as Kornberg was pursuing these biochemical studies of the transcription process, he devoted two decades to the development of methods to visualize the atomic structure of RNA polymerase and its associated protein components. Initially, Kornberg took advantage of expertise with lipid membranes gained from his graduate studies to devise a technique for the formation of two-dimensional protein crystals on lipid bilayers. These 2D crystals could then be analyzed using electron microscopy to derive low-resolution images of the protein's structure. Eventually, Kornberg was able to use X-ray crystallography to solve the 3-dimensional structure of RNA polymerase at atomic resolution. He has recently extended these studies to obtain structural images of RNA polymerase associated with accessory proteins. Through these studies, Kornberg has created an actual picture of how transcription works at a molecular level. According to the Nobel Prize committee, "the truly revolutionary aspect of the picture Kornberg has created is that it captures the process of transcription in full flow. What we see is an RNA-strand being constructed, and hence the exact positions of the DNA, polymerase and RNA during this process."
He has received the following awards: