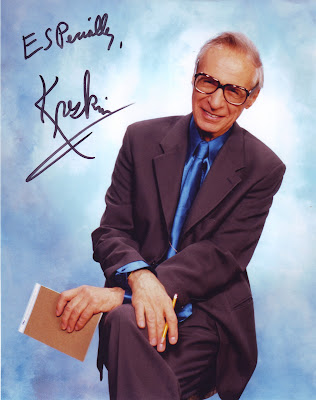 The Amazing Kreskin (born January 12, 1935), born George Joseph Kresge, is a mentalist who became popular on North American television in the 1970s. He was inspired to become a mentalist by Lee Falk's famous comic strip Mandrake the Magician, which features a crime-fighting stage magician.
George Joseph Kresge was born in Montclair, New Jersey to Polish and Italian parents.
From 1970 to 1975, Kreskin's television series The Amazing World of Kreskin was broadcast throughout Canada on CTV and distributed in syndication in the United States. The series was produced in Ottawa, Ontario at the CJOH-TV studios. An additional set of episodes was produced in 1975, billed as The New Kreskin Show. He appeared on The Tonight Show 61 times from 1970 to 1980. In the 1980s and 1990s he came to prominence again through several appearances on Late Night with David Letterman. In 2009, he became the first guest to make three appearances on the new Late Night with Jimmy Fallon.
He is still active as a live performer, appears regularly on WPIX in New York City, and appears annually on the Fox News Channel and CNN to give his New Year's Day predictions for the coming year. One of his best known tricks is finding his cheque for a performance, which he instructs the audience to hide while he is escorted off stage and into seclusion by other members of the audience. While finding the cheque on most occasions, he has failed to find the cheque nine times.
Though Kreskin makes "predictions", he does not claim to have paranormal or clairvoyant powers, and does not like to be considered a "psychic". He teaches classes for law enforcement groups, which "focuses on psychological methods such as jogging lost memories through relaxation techniques or detecting lies through body language and voice inflections".
The 2008 movie The Great Buck Howard is based on the experiences of writer-director Sean McGinly, who worked briefly as the road manager for Kreskin.
In 2002, Kreskin made a prediction that there would be a mass-UFO sighting over Las Vegas, Nevada on June 6 between the hours of 9:45PM and midnight that would be witnessed by thousands of people. He also stated that if there were no sighting, he would donate $50,000 to a charity. Hundreds of people camped out that evening yet no sighting occurred. On June 8, Kreskin appeared in the opening segment of the Coast to Coast AM radio show, hosted by Art Bell, to explain what had happened. Bell read Kreskin's press release over the air to the effect that: "the sighting prediction was a total fabrication in order to prove people's susceptibility to suggestion post 9/11". Kreskin claimed he was concerned that a terrorist, with the skills of a mentalist such as himself, could pull a similar stunt involving something much worse. He stated that the predicted sighting was only an "experiment". When asked about the $50,000 donation he previously promoted, Kreskin claimed there was indeed a sighting that night since he said glowing green orbs were supposedly spotted in the sky just before midnight and reported by witnesses after news camera crews had already left the scene. Because of this one reported sighting, Kreskin said his prediction came true anyway and therefore he did not have to pay the money he previously announced. This statement offended Art Bell, who opined that this was merely a publicity stunt on Kreskin's part, and officially banned Kreskin from his show.
As far back as January 1973, a magazine carried an interview with Kreskin in which he alluded to the possibility of this stunt—and to the dangers of the madness of crowds in general:
Kreskin is aware of both the benefits and dangers of hypnotism and claims that given an audience of 200 people, "I'll have them seeing flying saucers. Take the same crowd to Time Square on a hot evening and you can have them screaming 'fire'."
Hitler, says Kreskin, used hypnotic techniques in his speeches—the torchlight parades and the sombre drum beating being evidence of this.
"Using suggestion, I could never make someone do something he didn't want to do. But it's different in a crowd," says Kreskin. "Psychologists don't know why, but somehow the level of morality is lowered and responsibility is lost."
"If my name is forgotten in years to come, I can only hope that I have taught people to wonder.

Email ThisBlogThis!Share to TwitterShare to FacebookShare to Pinterest
Etichete: The Amazing Kreskin