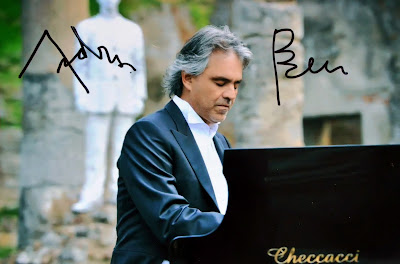 Andrea Angel Bocelli, OMRI, OMDSM (born 22 September 1958) is an Italian tenor, singer-songwriter, and multi-instrumentalist. Born with poor eyesight, he became blind at the age of twelve following a football accident.
Since winning the Newcomers section of the Sanremo Music Festival in 1994, Bocelli has recorded fourteen solo studio albums, of both pop and classical music, three greatest hits albums, and nine complete operas, selling over 80 million records worldwide. Thus, he is the biggest-selling artist in the history of classical music and has caused core classical repertoire to "cross over" to the top of international pop charts and into previously uncharted territory in popular culture.
In 1998, he was named one of People Magazine's 50 Most Beautiful People. In 1999, his nomination for Best New Artist at the Grammy Awards was the first time since Leontyne Price in 1961 that a classical artist had been nominated in the category. The Prayer, his duet with Celine Dion for the animated film The Quest for Camelot, won the Golden Globe for Best Original Song and was nominated for an Academy Award in the same category. With the release of his classical album, Sacred Arias, Bocelli captured a listing in the Guinness Book of World Records, as he simultaneously held the top 3 positions on the US classical albums charts. Seven of his albums have since reached the Top 10 on the Billboard 200, and a record-setting 8 have topped the classical albums charts in the United States.
With 5 million units sold worldwide, Sacred Arias became the biggest-selling classical album by a solo artist of all time, and with over 20 million copies sold worldwide, his 1997 pop album, Romanza, became the best-selling album by an Italian artist of any genre in history, as well as the best-selling album by a foreign artist in Canada, and a number of other countries in Europe and Latin America. The album's first single, "Time to Say Goodbye", topped charts all across Europe, including Germany, where it stayed at the top of the charts for fourteen consecutive weeks, breaking the all-time sales record, with over 3 million copies sold in the country. The single went on to sell over 12 million copies worldwide, making it one of the best-selling singles of all time.
Widely regarded as both the most popular Italian and classical singer in the world, Bocelli was made a Grand Officer of the Order of Merit of the Italian Republic in 2006, and on 2 March 2010, was honoured with a star on the Hollywood Walk of Fame for his contribution to Live Theater.