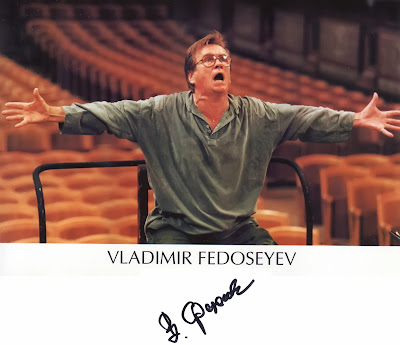 Vladimir Ivanovich Fedoseyev (born 5 August 1932, Leningrad, Russia, USSR) is a Russian conductor.
Fedoseyev graduated from the Gnessin State Musical College 1957, and Moscow Conservatory 1972. From 1974 artistic director and chief conductor of the Tchaikovsky Symphony Orchestra of Moscow Radio 1974-1999. He has also served as principal conductor of the Vienna Symphony 1977-. As of 2006, he is music director of the Tchaikovsky Symphony Orchestra of Moscow Radio.
Fedoseyev has particularly championed the operas of Rimsky-Korsakov and the music of Valery Gavrilin.
He is a recipient of the Glinka State Prize of the RSFSR, the Order "For Labor Valor", and distinction as a 'Dweller of the siege of Leningrad. The asteroid 7741 Fedoseev was named in his honor.
In the October of 2012 issue of "Seven Arts" (Семь Исскуств) the conductor Gennady Rozhdestvensky recalled Fedoseeyv's role the purge of all Jews from the Moscow Radio Symphony (Большой Симфонический Оркестр, БСО).
His recording of Rimsky-Korsakov's May Night was awarded Orphée d'Or by the French Académie du Disque Lyrique.
In 2002-2003 the Swiss label Relief published a series "Anni in Concordia 1974-1999", primarily reissues of Melodiya recordings, in tribute to Fedoseyev's work with the Tchaikovsky Symphony Orchestra. This series notably featured Cyrillic librettos to operas otherwise little known in the West.