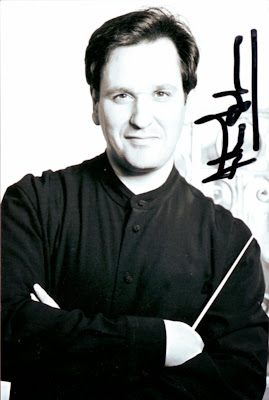 Sir Antonio "Tony" Pappano (born 30 December 1959) is a British conductor and pianist, music director of the Royal Opera House since 2002.
Pappano was born in Epping, Essex. Pappano's family had relocated to England from Castelfranco in Miscano near Benevento, Italy in 1958, and at the time of his birth his parents worked in the restaurant business. His father, Pasquale Pappano, was by vocation a singing teacher.

When Pappano was 13 years old, he moved with his family to Connecticut, United States. After musical training in piano, composition, and conducting, he became a rehearsal accompanist at the New York City Opera by the age of 21.
A pianist as well as a conductor, he attracted the attention of fellow pianist and conductor Daniel Barenboim, and became his assistant at the Bayreuth Festival. He worked in Barcelona and Frankfurt, and served as an assistant to Michael Gielen. His first conducting appearance at Den Norske Opera was in 1987, and he became music director there in 1990.

In 1992, Pappano became music director of La Monnaie, the Belgian Royal Opera House, a post he held until 2002. In 1999, he was named the music director of the Royal Opera House (ROH), Covent Garden effective with the 2002-2003 season. At Covent Garden, Pappano and Elaine Padmore, the ROH Director of Opera, share responsibility for production. His current ROH contract is through 2013. Pappano is the youngest conductor to lead the orchestra of the ROH, accompanying both the Royal Opera and Royal Ballet.
Pappano has also been principal guest conductor of the Israel Philharmonic Orchestra. In 2005 he became music director of the Orchestra dell'Accademia Nazionale di Santa Cecilia.
Pappano was knighted in the 2012 New Year Honours for services to music. On 17 January 2013 he received the Incorporated Society of Musicians' Distinguished Musician Award.
Pappano is married to Pamela Bullock, an American vocal coach. He visits his family in Connecticut and Georgia on holidays.