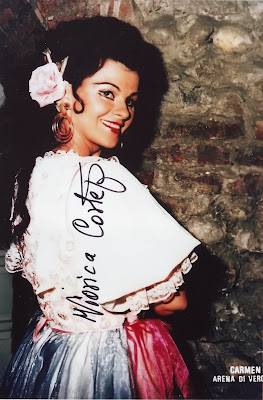 Viorica Cortez (born December 26, 1935 in Bucium, Iaşi County, Romania) is a noted Romanian-born mezzo-soprano, later French by naturalisation. Starting her operatic and concert career in the mid-1960s, she went on to become one of the most prominent female performers of the '70s and '80s. An example of professional longevity, she is present on some of the most prestigious European opera scenes.
With a well-determined Spanish origin, Viorica Cortez is the eldest of three sisters. She was born in Bucium, a village in the vicinity of Iaşi. Cortez enjoyed an artistic milieu in her parents' house, finding her passion and intense desire of studying music. Later on, she was received in the Iasi Conservatory and, for her final three years of academic studies, she switched to Bucharest's "Ciprian Porumbescu" Conservatory (today the University of Music). In Iasi, at only 17, Cortez made her debut in the alto part of Beethoven's Ninth Symphony. She then toured the towns of Moldavia for years, almost exclusively in vocal-symphonical repertoire.
In Bucharest, Viorica Cortez was the student of Arta Florescu, a post-war Romanian soprano and professor (besides Cortez, some of her important apprentices were Marina Krilovici, Eugenia Moldoveanu, Maria Slătinaru-Nistor, Leontina Văduva and even Angela Gheorghiu). She vividly encouraged the young mezzo-soprano to consider international competitions. Cortez took her advice and applied for the International "George Enescu" Contest in Bucharest (1964), where she ranked only fourth. The same year, she won the International Singing Contest in Toulouse, along with Romanian fellow tenor Ludovic Spiess. In Le Monde, the well-known critic Jacques Lonchampt praised her dark, velvety mezzo, her artistry and technique, as well as her glittering beauty on the stage. This victory at Toulouse was immediately followed by a contract in the city's noted Théâtre du Capitole for the year to come. In the final gala, Cortez sang Leonora's aria from Donizetti's La favorita, which was to become one of her signature concert and recital pieces. 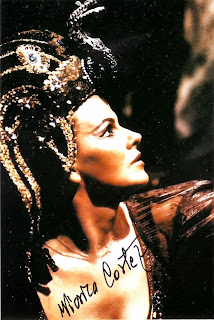