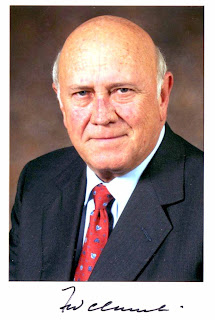 Frederik Willem de Klerk (born 18 March 1936), often known as F. W. de Klerk, was the seventh and last State President of apartheid-era South Africa, serving from September 1989 to May 1994. de Klerk was also leader of the National Party (which later became the New National Party) from February 1989 to September 1997.
De Klerk is best known for engineering the end of apartheid, South Africa's racial segregation policy, and supporting the transformation of South Africa into a multi-racial democracy by entering into the negotiations that resulted in all citizens, including the country's black majority, having equal voting and other rights. He won the Félix Houphouët-Boigny Peace Prize in 1991, the Prince of Asturias Award in 1992 and the Nobel Peace Prize in 1993 along with Nelson Mandela for his role in the ending of apartheid.
He was one of the Deputy Presidents of South Africa during the presidency of Nelson Mandela until 1996, the last white person to hold the position to date. In 1997 he retired from politics.